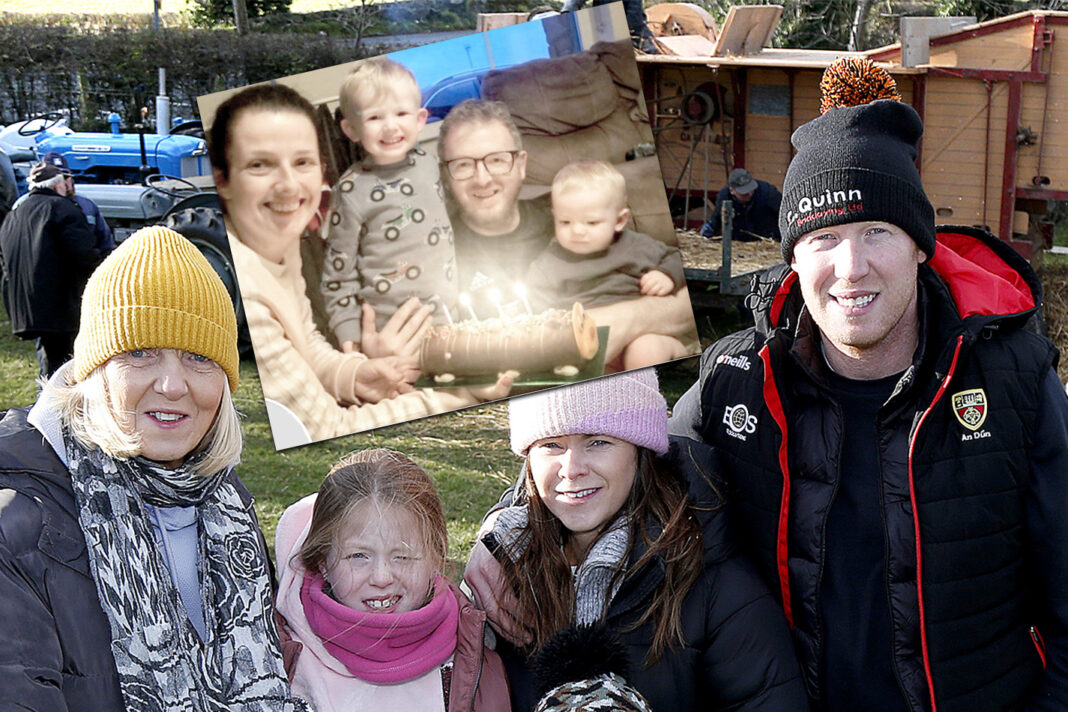 THE wife of Gary Addis, the Clonvaraghan man who is battling the life-changing effects of kidney cancer, has thanked the local community for their support during a difficult time for their family. A series of fundraising events have been held to help Gary, who is recovering from surgery following the discovery of kidney cancer in September.

He and his wife Sarah and their two children are facing a massive change to their lifestyle, as Gary is now sight impaired, and will need time to return to work. She also asked everyone to pray for her husband. Sarah said: “I just want to thank everyone for their amazing support over the last few months and we are completely blown away by their kindness and generosity. I would also ask people to please keep Gary in their prayers.”

The Addis family embarked on a fundraising effort last year to help them modify their home to allow Gary to adapt to the effects of his illness. They set the target of raising £50,000 and their Just Giving page has reached £43,000 at the time of writing. That has happened following generous donations from local people as well as monies raised from a series of events that took place recently. A threshing event was held by Claragh Bridge Vintage Club on December 29 to support the ongoing fundraising efforts. Mayobridge Golf Club held a ‘Get Gary Home’ scramble as the club wanted to support Gary. His father Harry was Mayobridge GC captain last year. They suspended their winter league in order to facilitate the charity scramble. Thirty teams participated over two days. The final total raised by Mayobridge GC was £7,650. Gary is a lifelong member of St John’s GAC, and the club held a charity football match during the Christmas period to help raise money. The game included some former members of the club Gary played for in New Zealand, Marist Rangers, who travelled from all over Ireland in order to play in the game. The St John’s club also held a very successful pool competition, which had 57 entrants. Sarah’s work colleagues at Seeconnell also held a sponsored walk, in order to raise money for Gary.

The massive support that Gary has received from the local community has delighted him and his family. They faced a difficult year in 2022. In September, after a friend’s wedding Gary fell ill and following a brain scan at the Ulster Hospital a brain tumour was discovered. That led to another tumour being detected in his kidney. They realised at that point that the renal carcinoma had metastasized to his brain.

He had brain surgery on October 23, a month after the tumour was discovered, and a day after his 41st birthday. The surgery removed the tumour but a few days later they discovered that due to damage to the brain he suffered sight impairment called haemianopia. This left Gary only being able to see out of the right side of his eyes. This is a massive blow to him and his family as he can no longer drive, or play football for St John’s. His wife Sarah will now have to be his full-time carer until Gary adjusts to his new lifestyle.

However, Sarah told the Mourne Observer: “We are hoping Gary will be able to return to work at some point in the future when he is well and has adjusted to his sight loss. “Gary is doing well, he is recovering well. “Because of his eyesight he needs a lot of help with everything day to day. “But he is getting stronger and building up his strength for the next step in his treatment.” But there are challenges ahead. Gary will receive a scan on his kidney at the end of February and the experts will make a plan of how to deal with his cancer. They now have to adapt to day to day living and then they will look to modify their home in Clonvaraghan. If you would like to donate to help Gary, his JustGiving page is ‘helpgetgaryhome’.