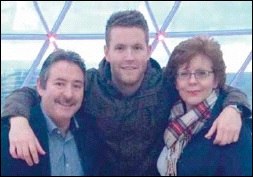 Following  a local campaign, Geraldine McDonald, mother of Alan McDonald, who is fighting a life-threatening disease thousands of miles from home in New Zealand, gave an update on the 32-year-old Newcastle man.  Alan has recently received an infusion of a drug called Eculizumab. His family adds that it’s too early to say how he is responding to this treatment, but they hope it can be a “game changer” in his recovery. “It has been another tough week for Alan, as the medical team in Christchurch worked tirelessly to keep him stable with a series of procedures, including Plasma Exchange as well as regular dialysis,” Geraldine explained. “The treatment so far has already taken a toll on his body, and in Alan’s case it is not having the outcome the medics had hoped for.” Alan was diagnosed with aHUS, an extremely rare disease which affects blood cells and causes damage to vital organs, over three weeks ago.  “We’ve found it really difficult watching Alan go through all of this and not being able to be with him,” Geraldine added. “The distance between us back home and him in New Zealand feels even greater, and we are desperate to see him again. “We applied for visas to enter New Zealand on compassionate grounds three weeks ago but have had no confirmation or updates yet.” Borders in New Zealand remain closed to overseas visitors as they prepare for the country’s Covid-19 peak, but indications show they may reopen in May. “Following our campaign to bring Alan home, many people reached out to share their experiences of either having aHUS or caring for a family member suffering from it. “This has brought us so much comfort, hearing how others, especially those closer to home, have been through a similar situation and are through the other side, living their lives to the full again.   “Alan’s treatment has since progressed and we can report that the drug needed, Eculizumab, arrived in New Zealand on Monday and Alan received his first infusion in the early hours of this morning. “It is too early to say how he is responding, however we are hopeful that this is going to be a game changer in his recovery.” The local man has expressed his gratitude to everyone in the community for all the support he and his family have received. “Alan still has a long road ahead, but he is buoyed by the support from back home and has asked me to pass on his heartfelt thanks, along with our own.” The family is now exploring all the options to ensure Alan will have the necessary medical support to enable him to make the long journey home to Newcastle. They are working closely with the British Embassy, New Zealand health authorities and the local Health Trust in Northern Ireland in preparation for his arrival on Irish soil.