GeneralANNIE MAY’S FUNDRAISING A CUT ABOVE

ANNIE MAY’S FUNDRAISING A CUT ABOVE 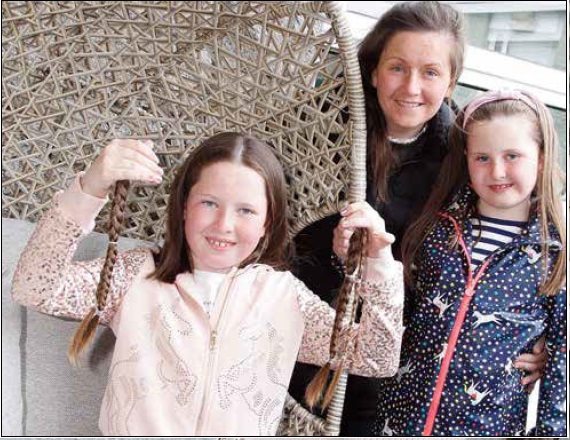 A NINE-year-old girl from Annalong has had 11 inches of her hair cut off to raise funds for Mourne Stimulus.

Annie May Morris is also donating her hair to the Little Princess Trust, which provides wigs to children who have lost their hair due to cancer treatment or other illnesses.

Her mother Christina explained that Annie May decided to take part in this act of charity partly because of Christina’s uncle, Andrew Donaldson, who passed away in January.

“When he passed away, we talked about getting something for Mourne Stimulus, in memory of him. “Just from myself, my husband, and my three kids. We had sort of talked about it, then Annie May one day decided that she wanted to get her hair cut.

“She said ‘Mummy, can I give my hair away?’ I said ‘Yes you can, you can give it to the Little Princess Trust. They make wigs for boys and girls who are not well and don’t have any hair’.

“She said ‘I really want to do that’. “I said that we would get it organised. “Then she said ‘Can I raise money as well?’ and I said she could.

“My uncle was called Andrew, but everyone called him Andy Boo. She said: ‘I want to raise money for Andy Boo’s school’.”

At the age of nine, it is perhaps surprising that Annie May would be so thoughtful.However, Christina explained that it wasn’t a surprise that her daughter wanted to do this for her uncle. “We all loved him, but Annie May loved him very much. He was non-verbal. He didn’t talk or communicate. But she would have sat down beside him and chatted away to him. She never realised that he didn’t answer her. She just chatted away to him. “They were all brought up knowing him and knowing that he was special.”

Christina had noticed other people donating hair to the charity.

“I had heard of different ones who had taken part in supporting the Little Princess Trust. I showed her the website. “She was so thrilled. When we were cutting her hair the hairdresser said that she could get more taken off, but she said that it would make it shorter. Annie May said ‘yes, take more, if it will go towards the boys and girls’.”

Going from having long hair down her back, to short hair, will take a bit of getting used to, Christina added.  “She has never had her hair cut, only wee trims. She’s always had really long hair. It’s never been short. “She was so excited (to get her hair cut).

Even when they cut off the two plaits she was laughing. Her wee face was so happy. “It is going to take a while to get used to. Her hair was so long. But she really suits it and she is over the moon. “The girl who cut her hair, her uncle William attends Mourne Stimulus. She approached me about cutting Annie May’s hair when she heard that we were doing it because her uncle attends.” The fundraising continues on even after Annie May’s hair has been sent away to the Little Princess Trust.

The JustGiving page can be found at https://www.justgiving.com/fundraising/christina-morris6 – and has raised over £800.

“I had put a target of £100 on the JustGiving page. I thought even if we could get £100 it might buy something for the sensory room that Andrew loved to use. Or lights or something like that. “We are blown away by the support of friends and family. Even people in the street have met me and have said to me that they know people who go to Mourne Stimulus, and they say that they ‘want to give money to the wee girl getting her hair cut’.

“They are strangers to me. It’s been unbelievable.” Christina emphasised how important

the money will be for Mourne Stimulus. “When Andrew passed away my granny said in lieu of flowers they would collect money for Mourne Stimulus. It is only part-funded by the government. So much of the community supports them. It is such a worthy cause. They need that support. “They go above and beyond.

“The community is realising what a vital service Mourne Stimulus provides. “Through social media Mourne Stimulus is able to share more about what they do. There are so many people who go with different needs and what they provide is fantastic.”