SportBobbie looks back on 50 year devotion to football

Bobbie looks back on 50 year devotion to football 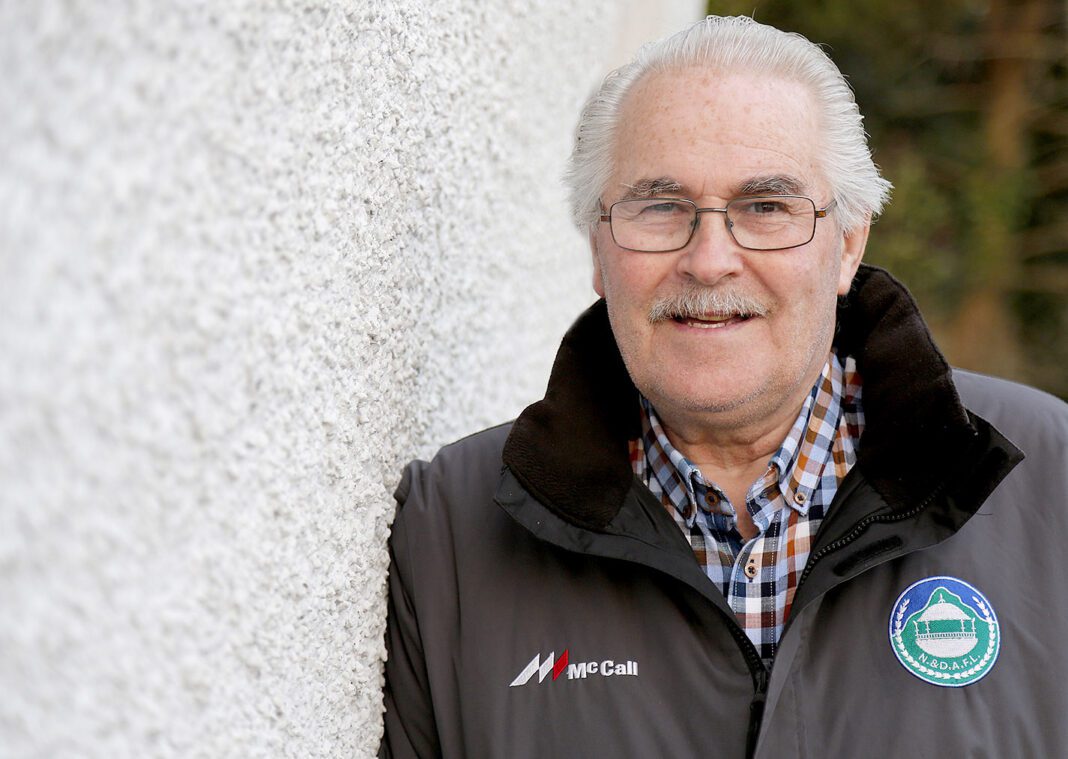 Bobbie Reid says he was surprised and honoured to receive a gift to mark his 50 years of involvement in the Newcastle and District Football League.

The Ballynahinch man was given the memento, a portrait of himself by Downpatrick artist Aidan Sloan, at the Dalzell Cup final earlier this month, and he explained that it was entirely unexpected.

“I was surprised, I suppose that was the main feeling, and certainly honoured.

“Anything I have done for the league over the past 50 years has been an honour. I certainly wasn’t looking for reward. But it’s nice to know that you are respected.”

What Bobbie did to deserve the award was to serve football in Down and farther afield as a dedicated coach and administrator.

He has enjoyed a wide and varied career in football.

“You could put it this way, I have seen it and done it, and football has helped me live the good life at that level. Football has been good to me. I am steeped in the game.”

Bobbie admits that his start in administration came about because he didn’t make it as a player.

He grew up in Ballynahinch and played football at the Millbridge. When he realised he wasn’t going to grace the field of play, he welcomed the opportunity to take on the administrative side.

“My playing career didn’t get off the ground. People said to me why don’t I get involved in administration and that was what I wanted to hear. It was a substitute for playing the game.”

In 1972, he was introduced to the Newcastle League by the late Billy Hamilton snr, a founder member of Ballynahinch United. Bobbie had previously been involved with Ballynahinch Rec. He managed the Swifts in the 1970s, taking them to a double and promotion.

He then moved to manage Dromara in the late 1970s, which, he pointed out, was controversial. “It’s a cardinal sin. It’s like moving from City to United or vice versa,” he said. He managed them for four years and also won promotion and titles.

After his spell at Dromara ended, he became a referee for five years.

In the early 1980s he returned to management in the position of Ballynahinch United First team, in their first year in Intermediate football.

Following that role he went on to be a club scout with Glenavon for two years. When Roy Walker became manager of Glenavon he promoted Bobbie to chief scout for a further two years.

“That role was a way to help players progress, and to express themselves in the game. Progression is a big thing in football,” he said.

In 1992 he got involved with the County Down Milk Cup squad and was manager of the U-14s that attended the major youth tournament on the North coast, before, after four years, becoming chairman. “I did that basically to help young players. It was a very rewarding role.” He retired from that job in 2012.

Two years earlier he had joined Loughgall Football Club and was there for three years. “That was the pinnacle of all my involvement at pitch level. I was team attendant there and had the pleasure of being involved in their promotion to the Premiership. I spent two years in the Premiership with them.”

As an administrator, his career was varied. He became a member of the County Antrim FA Council around 1990 and became chairman of the Junior Shield Committee, later becoming president of the County Antrim FA in 2000/2001, also chairman of the Junior Cup Committee in 1999/2000. He has spent 28 years in the IFA Council. In 2013 he took a big step in administration, as he became IFA Disciplinary Committee chairman. He pointed out the men who inspired him to be a better administrator. “The late Billy Hamilton introduced me to administration, and Gordon Bell who was the chairman of the Newcastle League. They inspired me, and encouraged me.” When he became Disciplinary Committee chairman he gave up involvement with clubs as he felt it was better to be neutral. He also realised that administrators perhaps don’t get the respect they deserve. “You don’t come onto their radar until you do something they don’t like. Then they know all about you. By in large they accept it, but they don’t realise the work that is involved in the job.” He ends his administration roles with the IFA in June of this year as he turns 75, the maximum age for holding office. For the vast majority of his career in football he was match secretary of the Newcastle League. “To be a good administrator you have to be dedicated. When the late Gordon Bell introduced me to the office of match secretary of the League, he said to me, ‘I need a job done for four years, would you do it for me?’ “I said ‘Gordon, I haven’t got the time’. “He said, ‘you are the man. When I want a job done I ask a busy man, so you are doing it’! “It didn’t end up four years, it ended up 44 years. “You have to be committed and you have to enjoy what you are doing.”

There is a challenge though, and that is the time and effort it takes. While Bobbie says he has no regrets, he admitted there have been sacrifices. “Your family possibly suffers. I couldn’t have done this job if I didn’t have my wife behind me supporting me all the way. That was key to it.” His biggest honour was being president of the County Antrim FA for two years. “I always loved administration. It has its highs and lows, but the good times always outweigh the bad.” The game has changed as the years have passed since his days of playing at the Millbridge when he was young. “When I started, football was fun, but I think the fun has been taken out of football. Legislation now is crazy to run football. “The quality of the game improved for 10 to 15 years, but in the past 10 years I feel it has dropped dramatically at all levels. “Certainly in our area the Killyleaghs, Drumanesses and Downpatrick Recs of this world were winning things, but it comes and goes.” Bobbie is the sort of man who wants to see teams in this area do well and he fondly recalls the days when that happened. “Seeing teams like Maghera doing the Junior Cup and Shield double, coming from your league, is something else. “When I was president of the Junior Cup and Junior Shield Committees, that was an honour for the league. To see high offices being held by people from our league was an honour.”

BEST PLAYERS Bobbie said that among the best players he ever saw in the Newcastle League were John Peacock and the two McKibbins, Harry and Irwyn. Looking to the future, as Bobbie has to step away from the committees in the FA, he feels happy that the Associations are in a good place. “I have been blessed in that I have brought in Alan Craig who is now the Newcastle League secretary. “The type of people who do these jobs for a long time are dedicated people. He has stepped up to the plate and has eased my workload for the past 10 years. It pleases me no end that I am leaving somebody in there who knows the ropes and has proved himself. Alan, Johnny McGreevy, Kieran McMahon, these are people who are the next generation.” Bobbie will continue his work at the County Antrim FA and he has no plans to leave the Newcastle League at the moment, though he is only “backroom staff”. And he still has ambitions. “One of the big things I would have liked to see in our League was the game being played in the summer. It was a big idea of mine but it never got off the ground. “There are moves for senior football to go that way. I think it is a better time to play football. The Newcastle League was formed out of a summer league. “If I could see summer football brought in at our league level I would retire. That is my one ambition. “We were close to it four or five years ago but I think the clubs got spooked about it. But there is a lot to be gained.