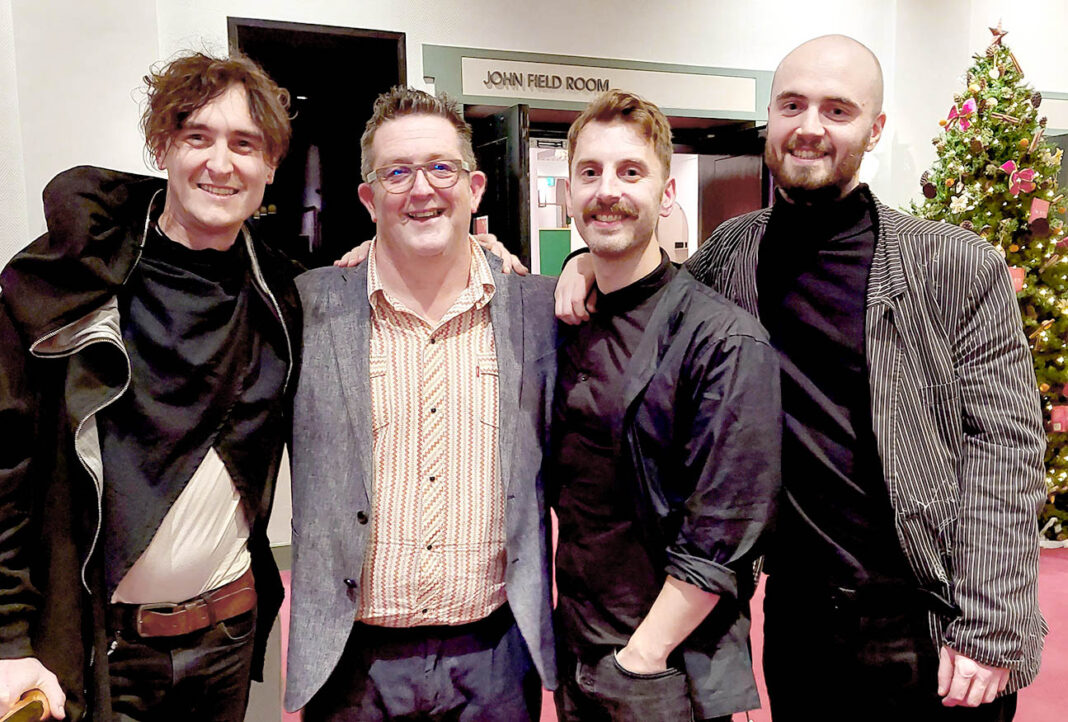 CASTLEWELLAN singer Dónal Kearney has said he and his fellow members of Trú were surprised and delighted to have been asked to sing as part of RTE Radio 1’s Christmas Broadcast. Trú are made up of Dónal, Michael Mormecha and Zach Trouton, and their performance will feature on the show, which is to be broadcast next Sunday, 18 December, and Christmas Day.

Dónal explained: “We were contacted by RTE to perform as part of their Radio 1 Christmas broadcast. It is a very big occasion. It was a big surprise when they asked us. It is quite a big production, but it is nice that we are on their list.” They performed ‘County Down’ at a soldout event at the National Concert Hall, where 1,200 people listened to them singing the song which was written by Tommy Sands from Mayobridge. It is a song calling for someone to return to County Down. The BBC’s John Toal, who compered the event, introduced the song by recognising that not everyone makes it home at Christmas. Dónal said: “The lyrics are calling to someone who has left, to return to County Down. “That is one of the reasons why RTE wanted it. It is for people who are returning home for Christmas.” And Donal explained why he was interested in the song. “I had heard the song at folk sessions. The room would go quiet and someone would sing the song. “I reached out and Tommy graciously handed over the song. “It is lovely to have that song.” The show was performed at the National Concert Hall. Dónal said it is an honour to feature on the hallowed stage in Dublin. “Between the three of us we have played in great concert halls. Myself and Zach have travelled all over the world to incredible concert halls. So, it is great to be playing this concert hall.”

The performance comes at a time of great excitement for Dónal and his Trú bandmates. They spent the past weekend at the Other Voices Festival in Dingle, an event which they were very excited to be a part of. “It’s all go. It has to be all go or you wouldn’t get anywhere. “A mantra I have in my life is you never know who will be there so you have to turn up.” He said they are particularly pleased to return to the event in Dingle. “That is one of the things we missed out on during the pandemic. I had Covid last year, so we had to postpone until this year “You never know who is going to be in the audience.” Dónal said of the Other Voices event in Dingle: “We opened the festival at 6pm on Friday night playing to a packed-out O’Sullivan’s Courthouse. We then played An Díseart on Saturday afternoon, when dozens of people were turned away at the door. On Sunday, we played a completely packed lunchtime session in The Dingle Record Shop. Mazz O’Flaherty, who runs the shop, got in a bit of trouble because there were about 30 people blocking up the footpath trying to get into the shop to see us.” These events will all be welcome as they will help to promote their new album. Dónal added: “We have got the whole thing recorded and we are waiting to do a mix. “Over the past few years we have had interest from agents and labels and R and R guys who are interested in seeing where we are going. “It is really good to hear from those people. They will give us advice about how to market ourselves. Hopefully we will get some support. You never know what will happen.” Trú released their debut album last year, ‘No Fixed Abode’ and, earlier this year, the band were nominated for a NI Music Award song of the year for ‘Plyve Cacha’ a Ukrainian folk song. They expect their new album to be released in the new year.