SportCELEBRATION FOR COUNTY DOWN JURORS

CELEBRATION FOR COUNTY DOWN JURORS 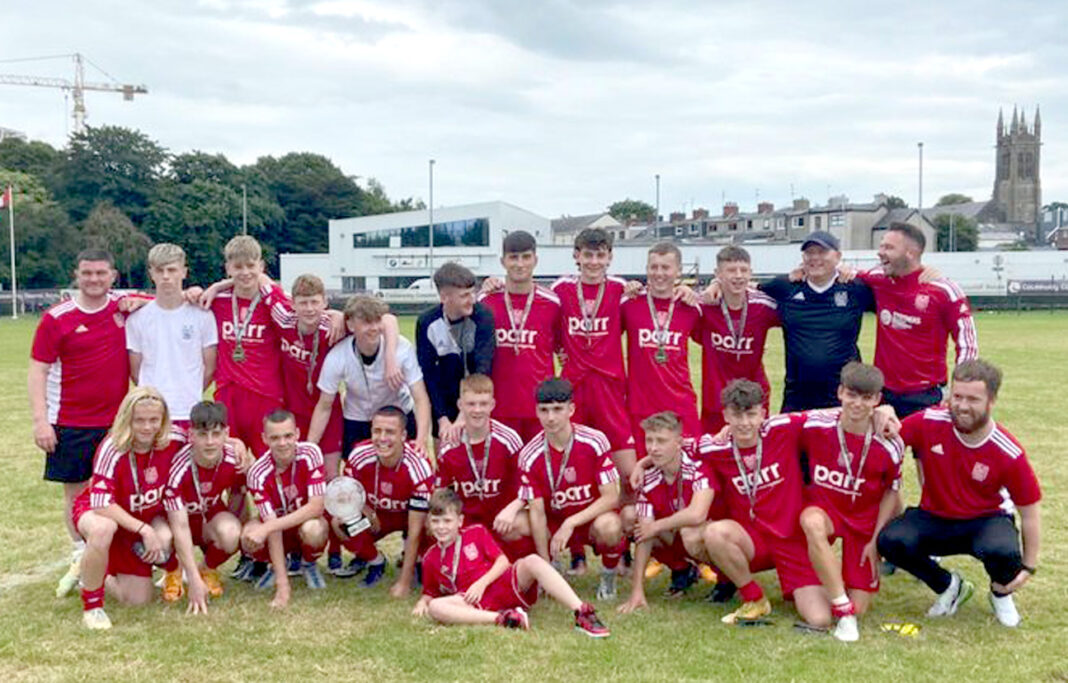 COUNTY Down Junior team last week returned from the StatSports SuperCup NI tournament on the North Coast with a trophy. Having missed out on a place in the top competition after games on Monday to Wednesday, they were entered in the second tier Globe semi-final. They faced County Londonderry in Coleraine and a Casey Smyth first half goal and an own goal in the second period saw them through to the final against MK Dons. The decider ended scoreless, County Down having hit the woodwork four times, but they made up for their narrow misses by winning a penalty shoot-out 6-5. In the qualifying stages earlier in the week, the Juniors drew 2-2 on Monday with County Armagh (goals from James Douglas and Brandon Kirk), beat Atlante 5-0 on Tuesday (Casey Smyth, Braiden Graham, Rory Powell, Connor McVeigh, Kenzie Beattie) and despite taking the lead on Wednesday against County Antrim, they lost 1-2, Aodhan Doherty scoring their goal. There was a great end to the week though for manager Scott Boyd and his lads, winning the Globe 6-5 on penalties on Friday at Anderson Park, Coleraine. Overall the Juniors finished fifth of the 14 teams. PREMIER The County Down Premier side, managed by John Bailie, was also entered in the second tier Globe event after a draw, win and defeat in their opening three games. Monday’s goalless draw with County Armagh was followed by a 1-0 win over Vendee (Shane Haughey) but on Wednesday they suffered a 2- 1 defeat to Club Puebla, the winner coming quickly after Rhys Annett had equalised for County Down. The Globe semi-final on Thursday was against County Fermanagh and although Annett put Down ahead Fermanagh drew level and went on the win 4-2 on penalties. That left County Down to play for third and fourth in the Globe and seventh and eighth in the tournament when they faced County Armagh. Annett was again on target, netting an equaliser in a 1-1 draw but for the second successive day Down lost on penalties, this time 3-2 to County Armagh. In a Facebook post, the County Down officials hailed it a successful week. “As the dust settles at the end of another tournament, a massive congratulations to all 36 players who participated. “A successful week that saw our Juniors win the Globe and our Seniors very unlucky to finish eighth after two penalty shoot-out defeats on the last two days. “All in all, the boys can be proud of how the week went and more importantly their behaviour and manners were impeccable.”