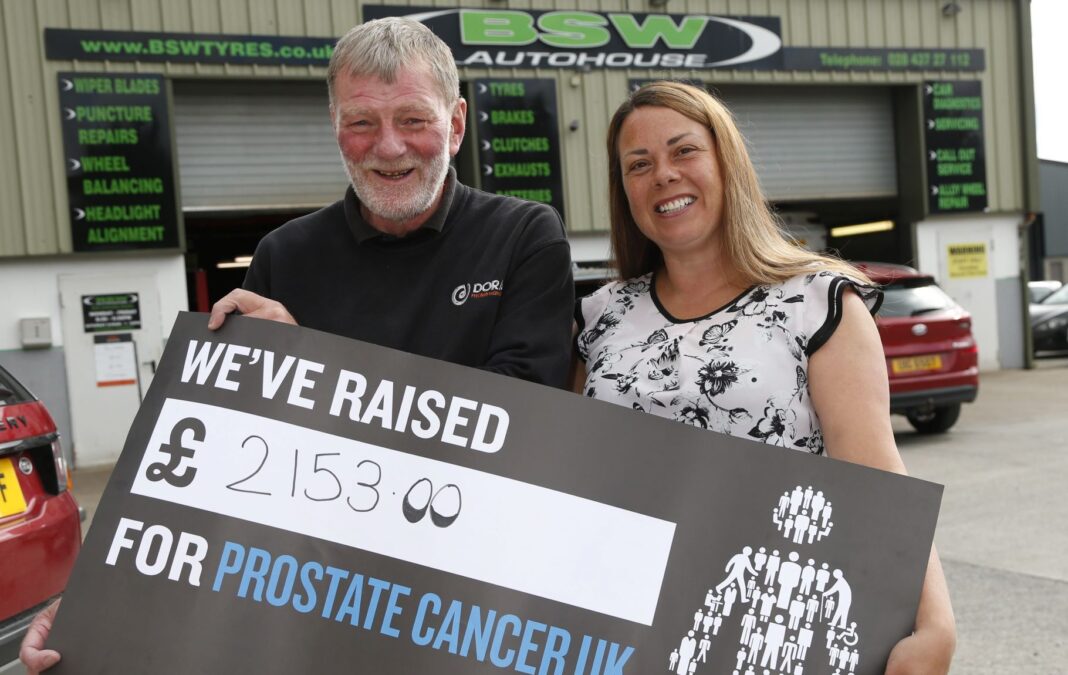 A MAGHERA man has thanked everyone who helped to raise vital funds to support the work of a wonderful charity. Over £2,000 has been raised through donations and every penny will bolster the support provided, and research undertaken, by Prostate Cancer UK. Adelle Connor, of BSW Autohouse in Newcastle, decided to run the fundraiser when her fiancé Darren’s dad, Mr Desy McCartan, was diagnosed. In addition to supporting the charity, she and the wider McCartan family hoped it would play a vital role in raising awareness of the disease and helping to educate men about some of the symptoms.

Prostate cancer is sometimes described as ‘a hidden cancer’. Desy was unaware he was ill until he suffered a cramp while out walking one day. This led to doctors diagnosing a burst vein – however, they felt further investigation was required.

Picking up the story, 64-yearold Desy, who commenced his cancer treatment at the start of the year and in June got the amazing news that his treatment had worked, said he wished to thank everyone who supported the fundraiser, as well as those who supported him, wife Willeen and their family circle. “On the 24th of June 2021 while out for a walk I took what I thought was a cramp in my calf. This was later diagnosed as a burst vein however the doctors were concerned about why it had happened and so ran a series of blood tests. They also checked my PSA (prostate-specific antigen) levels even though they were unrelated and I had no symptoms to raise concerns,” he explained. The results came back with a reading of 18.7 ng/ml. After an MRI scan Desy had a biopsy and the combined results confirmed he had stage 2 prostate cancer. “And so, my treatment began, with a six-month hormone therapy course combined with 20 radiotherapy sessions.

One year on and I have been given the allclear, with check-ups every six months over the next five years.” Acknowledging that “if it hadn’t been for the prompt and efficient diagnosis and treatment things could have been very different,” Desy said he hoped that by sharing his story it will encourage men to seek help and support, if they have a nagging worry or a persistent symptom. He added: “I would strongly recommend that all you men out there go get checked out. Early diagnosis can make all the difference in the success of the treatment.

I would like to take this opportunity to thank everyone for their help and support over this past year. Now go get checked out!” Echoing his thanks for the community’s support, as well as the ‘get checked out’ message, Adelle said: “We are so appreciative to everyone who has helped raise this money, which surpassed our goal, and if we can make men aware of the signs and symptoms, or encourage them to see their GP, then we know we will have achieved an added bonus.” Adding that Desy, a dad of two and grandad of four, took his diagnosis and subsequent therapy “in his stride and stayed very positive throughout the entire journey,” Adelle said the family will be indebted, for life, to Prostate Cancer UK and the medical professionals who helped them throughout “this trying time”.

PLENTY TO SEE AND DO AT LOUGHSIDE FESTIVAL

TALENTED FILMMAKER RETURNS FROM US WITH COMIC CON ACCOLADE

PLENTY TO SEE AND DO AT LOUGHSIDE FESTIVAL

TALENTED FILMMAKER RETURNS FROM US WITH COMIC CON ACCOLADE