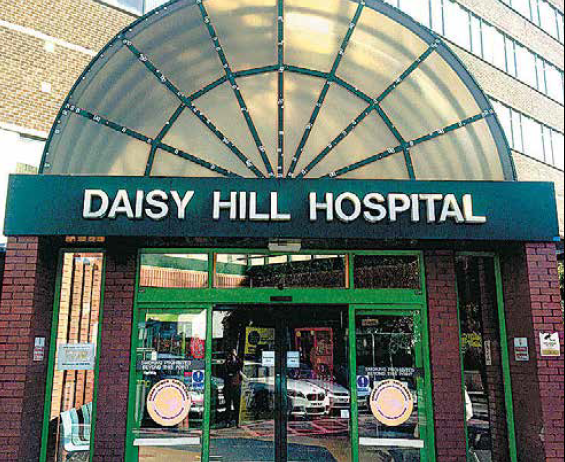 NEWS that Daisy Hill Hospital’s emergency surgical service is to be temporarily removed at the end of this month has raised concerns about its long-term future. The Southern Trust confirmed last week that, from 28 February, all patients requiring such surgery will be admitted to Craigavon Area Hospital “until a full consultation on a sustainable future service model has been completed with outcomes agreed”. This has led to local politicians and trade union representatives voicing their fears about the potential ramifications of this decision. A Trust statement confirmed that, despite repeated recruitment drives, Daisy Hill will soon only have one permanent consultant general surgeon – out of six funded posts – whilst Craigavon currently has eight out of nine posts filled. It also stated that “the consolidation of emergency surgery to one site will allow the team to maintain the safety of the service for all Southern Trust patients, whilst a longer term best practice model is developed to improve both emergency and elective general surgery”. Speaking at a Trust board meeting on Thursday, Acute Services director Melanie McClements said that, whilst Daisy Hill will retain its emergency department, they “cannot maintain a fully responsive emergency surgical service with one permanent surgeon”, and thanked staff for “their flexibility in supporting these temporary arrangements”. “With staffing now so stretched across both sites, the safest way of achieving a more equitable service and the best possible outcome for patients is to have all emergency surgical patients admitted to Craigavon,” she stated. “I want to assure local people that Daisy Hill remains an essential part of the Southern Trust hospital network. “It has a very busy emergency department and a wide range of very vibrant specialities. “We aim to maintain the acute status of Daisy Hill through this process, whilst securing and enhancing its elective surgical capacity.” South Down MLA Sinéad Ennis (Sinn Féin) said it is essential that the relocation of emergency surgery from Newry is “strictly temporary”. “Although the services will still remain within the Southern Trust, Daisy Hill must not be forgotten,” she continued. “Craigavon is a long journey for people in the Mournes to access surgery. “Sinn Féin will be meeting with the Trust to ensure these services return to Daisy Hill. “The Health Minister (Robin Swann) and the Southern Trust must explore all options for recruitment to ensure the safety of all patients and staff. “Sinn Féin will continue to stand up for Daisy Hill, to prioritise not only the retention of existing services, but the expansion and enhancement of our first class hospital.” Mournes TUV councillor Harold McKee said that the Trust decision calls into question its vision to “deliver safe, high quality health and social care services, respecting the dignity and individuality of all who use them”. “There is a total of over 380,000 people who live in the Southern Trust area, with over 10,000 of these people living in the eastern Mournes area, which is at least 70 minutes away from Craigavon Area Hospital,” he added. “There needs to be a real financial incentive with a guaranteed number of years of job security to encourage surgeon and other senior posts to be filled.” Kevin McAdam, Unite’s regional officer for health, stated that the decision would lead to people needing surgery facing “the delay of being transferred from one hospital to another”. “The people of Newry and districts cannot be abandoned like this,” he said. “Reconfiguration of services must improve healthcare provision, not abandon communities. “Our members in the NI Ambulance Service advise that this closure would leave people in Kilkeel, for example, one hour 10 minutes away from emergency surgery at Craigavon Hospital, and that’s even in blue light conditions. “Paramedics will need to make judgement calls on which hospital to bring emergency admissions. “It is undeniable that lives will be lost if this proceeds.” Catherine Farrell, UNISON Newry and Mourne Joint Branch secretary, confirmed that they are seeking an urgent meeting with Trust directors to answer “the numerous questions we have”. “Was the failure to recruit surgeons to the site allowed to drift?” she asked.  “Where is the equality impact assessment on this decision?  “This is socially and morally required as the decision will have a major detrimental impact on the services to our community. “The fact that there will be no emergency surgery in Newry will undoubtedly impact on patient safety, with the huge distance patients will have to travel to Craigavon.