GeneralDancing with the stars Matthew deems show 'an amazing experience'

Dancing with the stars Matthew deems show ‘an amazing experience’ 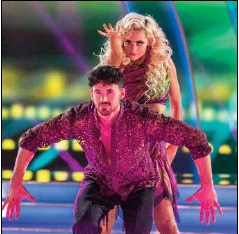 A man from Downpatrick has enjoyed his time on ‘Dancing with the Stars’. Matthew MacNabb (27), a past pupil of St Malachy’s High School in Castlewellan, was one of the dancing contestants on the popular RTÉ programme, but his time on the show finished at the conclusion of the semi-finals on Sunday evening. Matthew and his professional dance partner Laura Nolan did a samba to the Justin Bieber song ‘One Dance’. They also competed in a dance marathon and a dance-off with the other contestants, but did not make it through to the live grand finals on Sunday, 27 March. Two of the judges seemed to enjoy Matthew and Laura’s samba performance though. Judge Loraine Barry told Matthew on the show: “For you this was a triumph.” Judge Arthur Gourounlian said on the show: “You were great in hold with Laura. You have improved so much over the weeks.” Matthew said he was disappointed to not have made it through to the finals but was pleased to have had the experience of being on the show.

“It’s very sad not making to the final obviously,” he said. “To fall at the last hurdle was very annoying, but I’m very proud to represent Down and my area.” He said that he had not expected to have made it to the semi-finals, as he did not have any dance experience prior to this. “I’m just really happy I got to that point,” he said. Matthew said that being on the show was a lot of work as he was involved in practicing for 13 weeks straight without a day off, but that he was glad to have done it. “I loved it. It was an amazing experience,” he said. He said that getting to meet so many new people and performing the televised live shows in front of the nation were some of the highlights. “It’s been very nice in the sense that I’ve met a lot of people,” he said. “I think you develop a lot as a person over the course of the show. I’m very grateful for it.” He also wanted to thank everyone who voted for him and those who encouraged him in this endeavour. “I just want to say thank you so much to everyone who supported me and voted for me,” he said. “It just means a lot to me to be supported by the people I grew up with and to represent Down. “I’m very proud to have done that and just thank people so much for that opportunity,” he said. “It’s been unbelievable and I’ve enjoyed every second of it.”