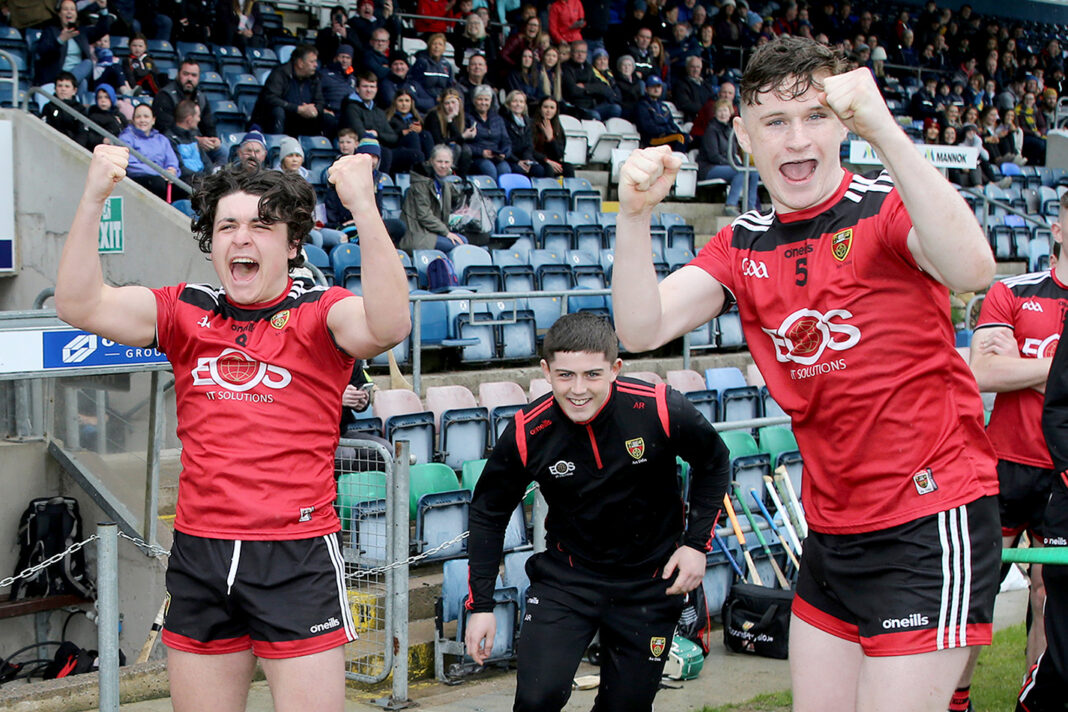 Ballycran’s Lukas Boyd became the first hurler from the Mourne county to lift the Richie McElligott Cup on Saturday evening. Playing at centre half back, he played a captain’s role and was instrumental to this young team securing a first ever All Ireland U-20B title. Roscommon had slain Mayo by 24 points just two weeks prior in the semi-final, whilst Down had to endure the lottery of penalties after twice coming from behind against Derry during normal and extra time. The heroics of Cahal Lavery between the sticks and Ciaran Savage’s match winning strike saw Down into the U-20B final for only a second time. The Rossies, like their northern opponents, were looking for their first ever title at this level and with Patrick Fallon, Mikey Lohan and captain Naoise Lohan in top form during their campaign they were installed as firm favourites. Roscommon played with a stiff wind in the first half and although they led by two points at the break, they’d only managed three points from play with the other six of their scores coming from dead ball expert Patrick Fallon. Conversely Down had potential match winners in Ballygalget’s Michael Dorrian and Oisin Coulter as they raised four white flags between them in the opening 30 minutes and along with Portaferry’s Finn Turpin and Newry Shamrocks’ James Duggan’s two points, this was as close a game that the Rossies has seen all year. PUNISHED Down’s discipline was their downfall in the first half as they were severely punished with Fallon’s dead-shot accuracy. Going into the second half 0-7 to 0- 9 behind Down were exactly where manager Sean Young was happy to be, knowing that they were still to play their best hurling. Roscommon were first to draw blood on the resumption with midfielder Mikey Lohan and a Fallon free giving the favourites a welldeserved four-point lead inside the first five minutes. Roscommon were looking comfortable and should have pressed home their advantage but thankfully for Down, the Rossies didn’t scored for the next 10 minutes, whilst the Ulster men scored a goal and four points to totally turn the game on its head and establish a momentum that would eventually see them crowned as winners. When Roscommon’s Ben Kelly was carded for hauling down a goalbound James Duggan seven minutes in, it was the kick-start of Down’s power play, with Duggan pointing the resulting 14 metre free. One minute later a high cross-field delivery from Finn Turpin towards Michael Dorrian saw the Ballygalget man out-muscle James Mannion on the edge of the 21, spin him and although his strike at goal was half hooked, the sliotar trickled back towards him and he flashed it to the net as goalkeeper Michael Corcoran desperately tried to deflect it wide. Within seconds of the goal, Dorrian gave Down the lead with a quick-fire point from the edge of the 21 and Down were now looking like an angered boxer out to finish the fight. TRIPPING Roscommon’s cause wasn’t helped when Kelly received a second yellow for tripping a goal bound Aodhan Furlong with 10 minutes played. Duggan’s free and a superb 90 metre free from Eoin Pucci, saw the Down crowd in raptures as they established a three-point lead. Roscommon refused to roll over and staged a mini rival with midfielder Mikey Lohan squeezing over a score from a tight angle with 15 minutes to play, sandwiched between two Fallon frees. Although the scoreboard showed parity, Roscommon were floundering under the waves of Down’s fluid attacks as they tried to plug the hole of being numerically outnumbered. Down’s full back Deaglan Mallon gave a masterclass in defence as he kept Adam Donnelly and Dara Finneran quiet over the hour and even assisted Pucci with the outstanding score of the game, his second score from inside his own half as Down took the lead again, 1-12 to 0-14. With just over 10 minutes left, Lukas Boyd scooped up Roscommon’s Eoin Kiernan’s dropped catch to feed Pucci whose long delivery from within his own 45 metre line found Duggan. He off-loaded to Furlong who in turn fed the unmarked Oisin Coulter at the edge of the square and he slammed to sliotar to the net. Down were now four points up and looking like champions. Roscommon only managed a single point in the final 15 minutes, a Fallon free, as Down tagged on a further three and the Ulster team even had the luxury of conceding a penalty that Cahal Lavery brilliantly saved five minutes into injury time. Down: C Lavery, J Higgins, D Mallon, E Pucci 0-3, 1f, C Savage, L Boyd, C Milligan, O McDermott, A Furlong, E Ball, J Duggan 0-5, 3f, M Dorrian 1-3, F Turpin 0-1, R Conway, O Coulter 1-3. Subs: S Milligan for Bell (38 mins), R O’Neill for McDermott (43), E Magee for Savage (54), R Corcoran for Coulter (58). Roscommon: M Corcoran, B Kelly, J Dillon, T Tiernan, M Hussey, N Coyle, J Mannion, J Dowling, M Lohan 0-3, F Killion, E Kiernan 0-1, M Brennan, P Fallon 0-9f, A Donnelly 0-1, R Conlon 0-1. Subs: T Fallon for Killion (20), C Mulry for Brennan (33), D Finneran for Donnelly (54).