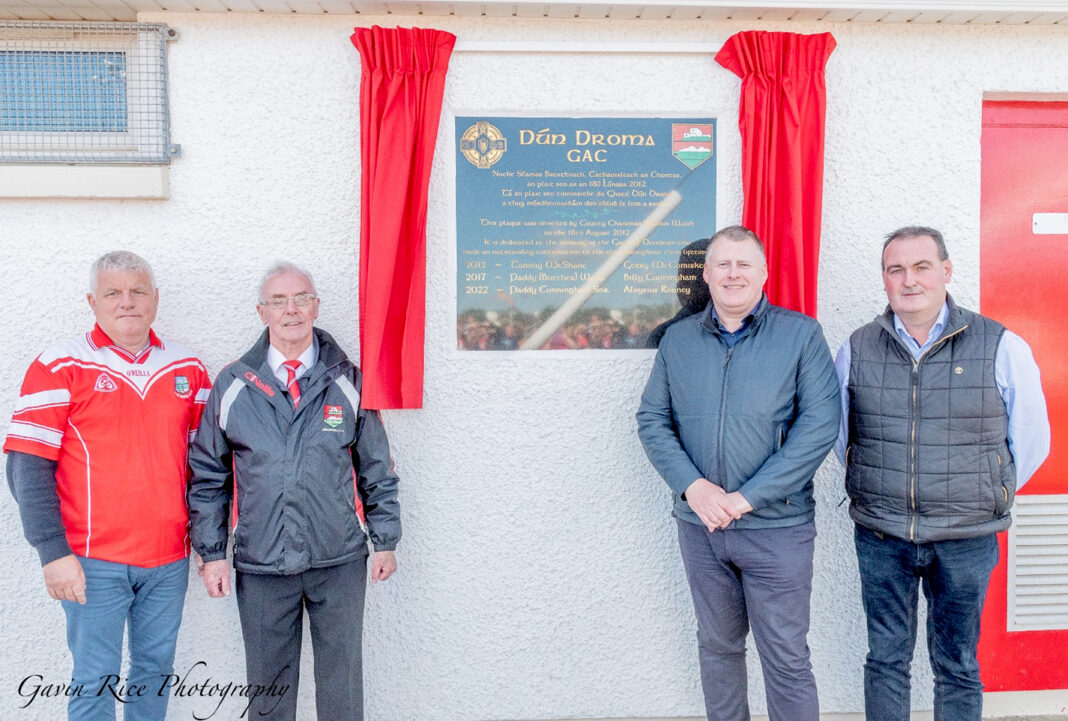 Remembering those who have given a lifetime of service is important to the club and notable past members honoured on the plaque include Tommy McShane, Gerry McComiskey, Paddy Ward and Billy Cunningham.

Paddy Cunningham Snr was born on Easter Sunday 1916. The next day, whilst Padraig Pearse was proclaiming the Republic on the steps of the GPO, Paddy was being baptised in the chapel in Dundrum. His love of the GAA was fostered throughout his youth and in 1928, at the age of 12, he made his first journey to Croke Park to watch Kildare, with the great Bill ‘Squire’ Gannon in their ranks. Kildare defeated Cavan by a point in the All Ireland Final that day. Paddy travelled to the game with his friend Jimmy Rooney on a bus that was run by the Parish. It cost him the princely sum of six shillings to get himself to Headquarters!

With Dundrum having formed as a club in 1934, Paddy was a proud member of their very first senior men’s team as well as being part of that year’s Down Minor setup. The Dundrum senior squad made their bow in the Down Junior Football Championship of 1935 when they took on Clanvaraghan in Ballykinlar. Paddy was one of the standout players that day for Dundrum in a game that is remembered for the fact the referee, Peadar Barry, cycled the whole way from Rostrevor and back to officiate the game! Paddy was one of the driving forces in the club in the mid ‘30s but as the decade progressed it became harder and harder for Dundrum to sustain their operations with garrison games like cricket becoming ever more popular. As the end of the ‘30s approached, Dundrum folded, with Paddy’s footballing journey taking him to play for Bryansford, Castlewellan and Ballybannon. In 1942, Paddy along with a few others decided to attempt to get a senior team going once again in Dundrum. Players transferred back to the club.

Paddy spearheaded this reformation. With Dundrum once again reforming in 1951, Paddy played a few more games before retiring. Then he became the club’s referee and carried out the role for another 13 years. Paddy Cunningham saw it all. He was there when this great club formed and experienced the ups and downs, and trials and tribulations, through the ensuing decades and generations. He carried out numerous roles during his time in the GAA, including chairman of the club. He was a passionate supporter of Down county teams and immensely proud of their successes in the ‘60s and ‘90s. His talent as a poet is acknowledged, along with his fantastic contribution to club events over the years. He would be immensely proud now looking down at his greatgrandchildren who currently play for the club’s underage teams, not to forget his family connections who have been involved with Dundrum GAC in its recent history. A Gael in its truest sense.

His longstanding contribution to this club will never be forgotten. On a wet May afternoon in 1951, by complete accident, Tommy McShane bumped into Pat McClean in Eddie Flynn’s shop. Talk turned to re-forming a GAA team in Dundrum. So, it was decided to make moves to start the process. The transfers back from Ballykinlar of Mick Grant and Colum Glavin were applied for and approved as were those of Tommy McShane and Jerome Flynn from Annsborough. WP Glavin was installed as the new club chairperson, Aloysius Rooney as secretary and Hugh McClean as treasurer. Thus, on the 12th May 1951, Dundrum GAC came back into being. With the club now re-formed, the onus was on Aloysius to sort out the necessary paperwork for transfers and registrations. This was an arduous task back in those days before the advancement of technology. John Walsh gave his field, ‘Walsh’s Meadow’, as a pitch for the club.

An old hut was taken from Mountpanther and it was used as changing facilities. The pitch was originally quite short but soon it was lengthened and regarded as one of the best pitches in the county. Aloysius was to the fore in all this background work. He facilitated negotiations, led discussions, and worked through correspondence, to ensure that the club had the best setup possible at the time. This diligence off the field led to success on the field, with the Dundrum senior men winning the East Down Summer League in 1952. There were bumper crowds at Walsh’s Meadow for these games, with Aloysius consistently located at the small bridge with a beige collection bowl, accepting donations from paying patrons.

Throughout the 1950s the club worked hard to sustain GAA within the Dundrum community. With promising youth prospects emerging, Aloysius set about ensuring that they got adequate game time to aid their development. One of those of prospects was none other than the legendary Eddie McKay. Aloysius regularly transported Eddie, along with the likes of Hugh Killen and Paddy Haughian, to play minor football with a team in Newcastle.

This investment in their development reaped huge dividends in the years to come. As the 1950s progressed, Dundrum GAC began to thrive. The senior men won the club’s first ever Down JFC title in 1957 after defeating Magheral in the decider. Aloysius doubled up as team mentor and secretary to contribute to the success of this side. For the remainder of the ‘50s and through to the ‘60s, Aloysius took on the management of the senior team. He guided them to the All-County B League title in 1961, which enabled Dundrum passage through to the All County A League (the equivalent of today’s Division 1). To this day, the club’s senior team have never reached those heights.

Aloysius was a key figure in guiding this team, putting all the necessary groundwork in to ensure that they remained at the top table of Down league and championship football until the mid-1960s. Players of this era recount attending Mass at the chapel on a Sunday morning. On their way out, Aloysius would have had the team list written out and up on the door of the chapel.

This was the main method of communication for each Sunday afternoon fixture. Down’s double All Ireland winning success of 1960 and 1961 brought great joy to the county and Dundrum. Aloysius, along with the newly installed chairperson E.J. Flynn, helped to organise victory celebrations for the Down squad in St Aquinas Hall on both occasions. Danny Flynn, Jarlath Carey and Eddie McKay were feted and revered, with the club taking immense pride in their achievements.

Sometimes in the GAA, in the spirit of volunteerism, it’s the unseen work that goes on behind the scenes that really marks an individual and their contribution out. Club stalwart Pat Lennon recalled on one Saturday evening in Spring in the late 1950s, when Aloysius and himself, armed with a bull hook and saw each, took to cutting the hedges and verges on the lane down to Walsh’s Meadow. The league was starting the following day and Aloysius wanted to ensure safe passage for all attending. This act, done out of sight, but for the good of the Dundrum club, was typical of Aloysius Rooney and the man that he was. An administrator, manager, and volunteer of the highest renown.

A great day was had on Saturday, with a parade kickstarting at Church Avenue before going down through the village to Páirc Seán Ó Caoilte. The ceremony itself then took centre stage, with juvenile exhibition football bringing the day to a close. The club would like to like to thank the Executive Committee for organising the event, St Joseph’s Pipe Band Longstone, who led the parade, and the Rooney and Cunningham families for their attendance. They would also like to thank Cathleen Garland for singing Amhrán na bhFiann, the coaches for organising games for the juveniles and Gavin Rice for taking photos throughout the event.