GeneralDUNDRUM NURSE ACCEPTS THE GEORGE CROSS ON BEHALF OF NHS

DUNDRUM NURSE ACCEPTS THE GEORGE CROSS ON BEHALF OF NHS 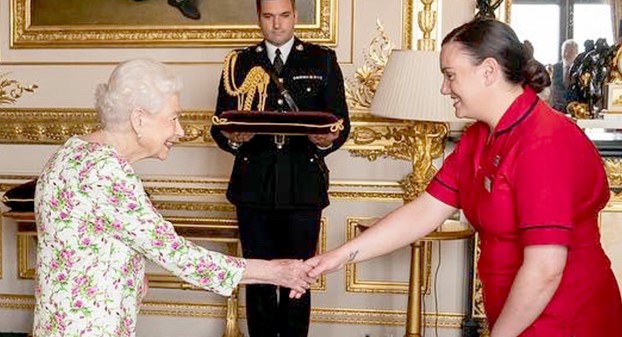 A DUNDRUM woman who played a frontline role in the Covid-19 vaccine programme said it was a great honour to attend Windsor Castle for a special event to recognise the National Health Service. Sister Joanna Hogg, who is employed by the Belfast Trust, was one of a small number of National Health Service employees to take part in a special ceremony last Tuesday when the Queen praised the “amazing” Covid-19 vaccine rollout as she celebrated the achievements of the health service across the decades by awarding the NHS the George Cross.

Joanna, a nurse who received the first Covid-19 vaccine in Northern Ireland, was amongst those selected to accept the George Cross on behalf of her health colleagues. The local woman travelled to Windsor for the ceremony, along with Department of Health Permanent Secretary Peter May. Speaking afterwards, Joanna said it is an “incredible privilege” to work in health and social care and added she was delighted to be asked to represent the region at last week’s event. “It was the honour of my lifetime to represent colleagues from across health and social care in Northern Ireland and accept the George Cross on their behalf,” she said. “I have always felt incredibly privileged to work in health and social care.

Being able to offer help and support to people when they are at their most vulnerable is a huge responsibility and is something I never take for granted – this has been especially true over the past two years. “The pandemic truly tested the entire health and social care system but I am immensely proud of the resilience and determination shown by all of my colleagues. I know this recognition from Her Majesty and the gratitude shown by the public is deeply appreciated by everyone in the health service.” Sister Hogg added: “I was absolutely delighted to travel to Windsor and accept the George Cross on behalf of everyone who makes up our health and social care family in Northern Ireland – my fellow nurses, doctors, domestic services, paramedics, pharmacists, porters, therapists, social workers, care staff, admin – and the entire team.”

Her Majesty the Queen was joined by the Prince of Wales for a small Windsor Castle ceremony where representatives from the four home nations were each awarded the medal. When the Queen was told about the Dundrum woman’s work she commented “you must have been tremendously busy too”. Each health executive from the four nations and their frontline colleague came up in turn to receive a George Cross which had been placed on a cushion carried by the Queen’s Equerry Lieutenant Colonel Tom White. The Queen touched the cushion in a gesture to symbolise its presentation. The award of the George Cross to the NHS was announced last year.

The George Cross was instituted by the monarch’s father George VI in September 1940 during the height of the Blitz. It is granted in recognition of “acts of the greatest heroism or of the most courage in circumstances of extreme danger” and recognises actions by civilians and military personnel not in the face of the enemy. The award of the George Cross by the Queen is made on the advice of the George Cross Committee and the Prime Minister, and this marks only the third occasion on which it has been awarded to a collective body, country or organisation, rather than an individual.