GeneralFinish line in sight for John

Finish line in sight for John 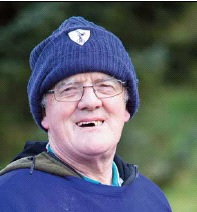 LOCAL man John Holland hopes to complete a 28-mile walk for charity this weekend, and in doing so support a charity that is close to his heart. John has so far raised almost £500 for a pancreatic cancer charity, by walking in the Newcastle area. He was inspired to take part when the charity posted on Facebook recently asking for people to walk 28 miles in the month of February in order to raise money. “Last Friday was World Cancer Day. I was on Facebook one day, and there was a message from the charity that said jog or run for 28 miles in February for Pancreatic Cancer. I said to my partner Mary that I was going to do that, so I got up and did it. “Pancreatic is a good cause. “I like to help charities. Anything for a good cause I will do right away.” John, whose wife, Geraldine, died of breast cancer in 2013, decided that he would take part but he wanted to get it done as quickly as possible.

On Friday 4 February he walked eight miles from Burren Meadow to Castlewellan and back. Then on Sunday he walked from Burren Meadow to Clough and back, which was nine miles. So, he hopes to get the final 11 miles walked by Sunday. “It’s not difficult, but at my age my feet can be sore when I come back. “I am up and fresh every morning and away early.” So far he has raised £462.50. But he hopes this figure will get bigger. He works part time in the bingo hall in Arcadia, and he said they have been an important source of support. “They have been great. Everyone has sponsored me.” His previous fundraising was for another cancer charity, which he did not long after his wife died. He says that he may do more fundraising in the future. “I will raise money for any cancer charity. I would do it to honour my wife.” He also climbed Slieve Donard in memory of Geraldine. He climbed with his four sons and two daughters and other members of his extended family. His sons are well known in soccer circles having played in the local leagues and Irish League.

Mark played for Distillery and Cliftonville, Barry played for Cliftonville, Glentoran and Larne, Johnny played for Bangor and Steven played for Killyleagh. John was a goalkeeper in the Newcastle League, and for Drumaness in the Amateur League and played Gaelic Football for Saul and Downpatrick. His family is important and he also said his partner has been an important support for him. “My partner Mary (Roberts) has helped me a lot. She is a great woman, she helps me to organise things.” He met Mary during bereavement counselling as her husband died from lung cancer 12 days after John’s wife died. They have been together for eight years. “It’s companionship. My wife has gone but she is not forgotten, Mary’s husband is gone but not forgotten. We have companionship and friendship.”