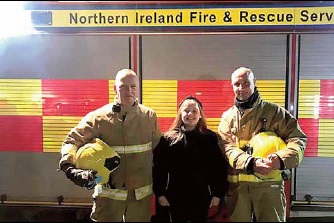 A Downpatrick schoolgirl who played a vital role in stopping a fire from tearing through her family’s farm has been praised for her efforts. Local firefighters were so impressed by ten-year-old Caoimhe Digney’s quick thinking and initiative, that members of her nearby fire station invited her and her mum Sian to the station recently to thank Caoimhe in person. Details of the visit were outlined on the Northern Ireland Fire and Rescue Service (NIFRS) social media platforms. Followers learned that, on Wednesday 23 February, Caoimhe was about to help tend to some newborn lambs when she happened to look out a window of her Bishopscourt Road home and saw smoke coming from one of the nearby farm sheds. Caoimhe quickly raised the alarm by alerting her mum. Then she ran to investigate to confirm there was a fire and immediately got her mum to dial 999 and ask for the fire service. ‘She promptly asked her mum to call us on 999 and asked her nanny to grab a torch and hi-vis jacket and stand out on the road to direct attending fire crews,’ the post outlined. Caoimhe then ran to a neighbour’s house to ask him to help with moving the sheep and lambs to another shed, while her mum used a garden hose to extinguish the small fire that had been caused by a heat lamp being knocked over by one of the sheep onto a bale of hay. ‘When firefighters from Downpatrick arrived they were relieved to find the fire had been extinguished due to Caoimhe’s quick actions. ‘The Downpatrick fire crew were so impressed with Caoimhe they invited her and her mum Sian to the station to thank her for her prompt actions,’ the post continued. It ended: ‘The fire crew were delighted to learn that Caoimhe had remembered her ‘P5 Safety Team’ talk delivered by NIFRS, and was confident to safely investigate and raise the alarm when she spotted the fire. ‘Well done Caoimhe – everyone at NIFRS is so proud of you!’