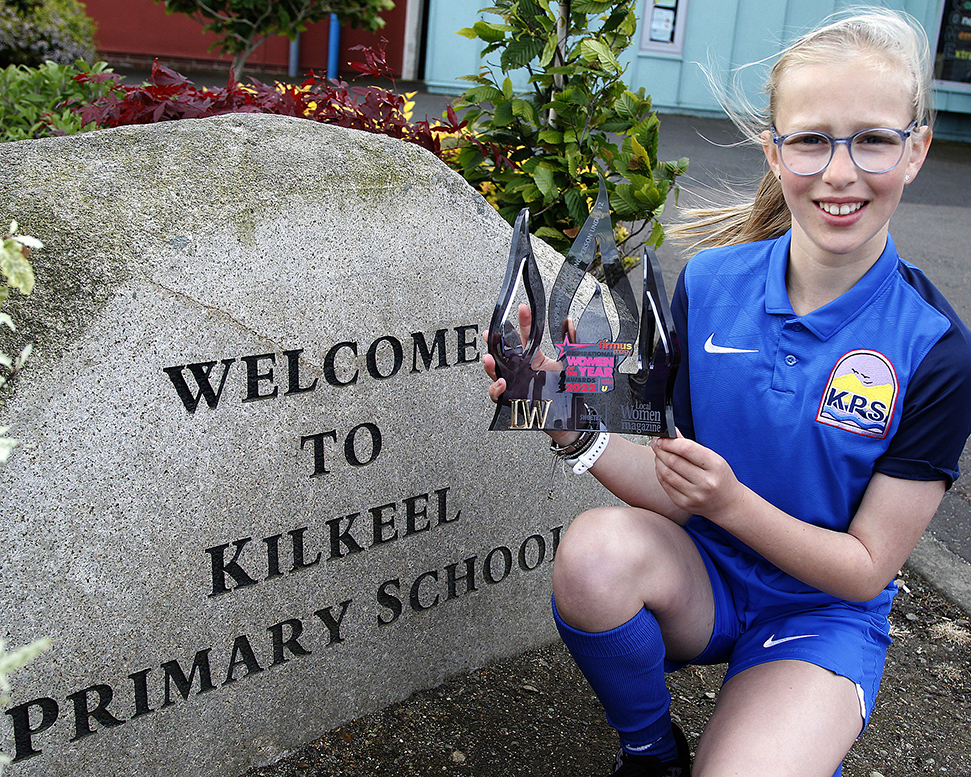 AN inspirational Kilkeel girl who has raised funds for a range of wonderful causes has received an award.

At the recent NI Inspirational Women of the Year Awards in Belfast, Summer Campbell was announced as the winner of the award in the ‘Inspirational Young Person Under 12’ category.

Over the past five years Summer and her sisters, Paige and Nicole, have raised more than £20,000 for charities and collected thousands of toys for children in hospital.

The girls wanted to do something in memory of their little cousin Blake, who sadly passed away shortly after he was born.

They thought of some of the ways they would have liked to share time with Blake, such as pushing his pram, swimming, cycling and climbing a mountain with him.

So they completed these activities, receiving sponsorship from family, friends and the local community and raised more than £3,000 for charity.

Summer, Paige and Nicole have taken on a wide range of fundraisers – involving roller skating, the 5k park run, cycling, a haircut and raffles.

Perhaps the most imaginative was a charity challenge completed by Summer in the early months of lockdown in 2020.

A host of charity fundraisers were inspired by the number 26, because the 26-mile London Marathon had to be postponed due to the coronavirus pandemic and many charities lost out on vital funds as a result.

Summer decided she would take on a ‘Yuck Challenge’, which consisted of having 26 items poured over her head, courtesy of her sisters.

A wide range of charities have benefitted from the girls’ fundraising, including SANDS, the Neo Natal Unit at the Royal Victoria Hospital, the Children’s Cancer Unit, the Children’s Hospice, Heartbeat and Daniel’s Rainbow Fund.

Each December the three sisters have also organised a toy collection, with the toys donated to the Neo Natal Unit at the Royal Victoria Hospital in Belfast and the Children’s Cancer Unit in the Royal Belfast

They also donated Easter eggs to the Children’s Cancer Unit. And in April 2020, during the first lockdown, the kind-hearted girls embarked on an Easter Bake for the local Brooklands Nursing Home in Kilkeel. Summer said she was really pleased to receive the award at the recent NI Inspirational Women of the Year Awards, staged at the Europa Hotel.

She was keen to stress that all this fundraising would not have been possible without Paige and Nicole and added the award would be shared jointly with them. The Kilkeel Primary School pupil said it was “heartbreaking” to see young children in hospital and it reminded her “that these children are so strong and so brave”.

Whatever charity challenge that she and her sisters embarked upon, she added, “it will never be close to what they have to go through”.