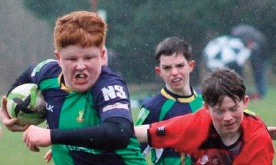 BALLYNAHINCH were back in action on Saturday following their disappointing League play-off final defeat to Lurgan and faced a difficult trip to Armagh in the Cup. They settled early and forward domination allowed Ruari Lester to find James Graham who punched a hole in the Armagh back line before offloading to Harvey Campbell for an excellent score. The confidence that had been missing against Lurgan visibly returned and Ballynahinch turned up the heat on the Armagh forwards. A great scrum against the head eventually saw Callum McCargo crash over after a Campbell offload. The hard carrying lock then scored his second, picking a great line to take an excellent Ethan Donaldson pass and score in the corner after Sam Hamilton was tackled just short. Armagh showed they wouldn’t be overwhelmed as they profited from a couple of missed tackles to score under the posts and give themselves a platform in the game as the teams turned around for the second half. Ballynahinch quickly closed the door on an Armagh comeback as Tiernan McCann used his pace to find a massive gap before passing to Campbell for his second score. Adam Blain then profited from superb quick ball from halfbacks Donaldson and Lester to blast through the Armagh defence on a flat line and score under the posts. Moments later Campbell completed his hat-trick after great breakdown work from Blain and a typically robust Luke McIlwaine charge for the line. The score at this point was 38-7 to the visiting side and they took the opportunity to make wholesale changes, allowing the bench some much-needed game time. Armagh came back with a flurry of late scores but Ballynahinch ended up comfortable winners and face Rainey at home in the quarter-final on February 26. All support welcome.