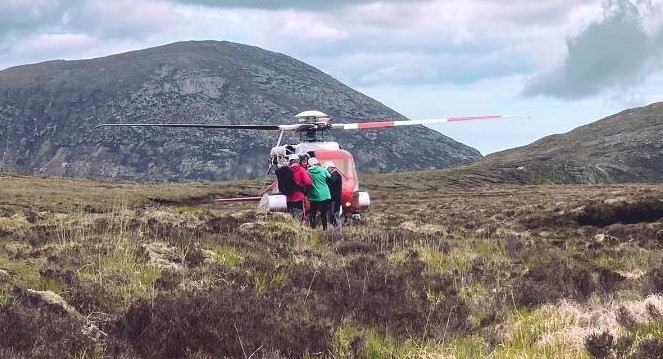 A WOMAN was airlifted from the Mourne Mountains on Saturday, after sustaining a debilitating injury.
Members of the Mourne Mountain Rescue Team were called out shortly after midday to assist the walker, who had slipped and sustained a minor but debilitating injury in what was described on its Facebook page as “a less than accessible location”.
Team members were on scene and had endeavoured to assist the casualty without success.

Alongside prepping for an evacuation by stretcher, the team requested a search and rescue helicopter, with the Irish Coast Guard’s Dublin-based aircraft Rescue 116 responding.

The casualty was airlifted to Donard Park in Newcastle and passed into the care of the rescue team’s doctor.
Fourteen volunteers of the Mourne Mountain Rescue Team responded to this incident, with
members of Newcastle Coastguard team also involved – setting up the helicopter landing site at Donard Park.