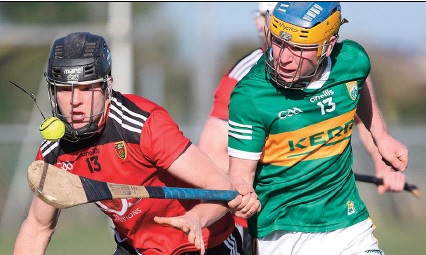 Six points behind after playing into a strong wind in the first half at Ballycran, this was nothing new to Down as they had faced worse three weeks earlier when behind by 15 to Kildare. Three minutes after the restart, a long defensive clearance from Marc Fisher deep into the Kerry penalty area was plucked from the sky by Eoghan Sands and as he turned towards goal he was hauled to the ground by Conor O’Keefe. A black card and automatic 10- minute sin-bin for O’Keefe gave Down a penalty and a chance to start a comeback that ended in a memorable victory after two injury time Oisin MacManus points. Under clear blue sunny skies, Kerry were first out of the blocks with a Shane Nolan free and an 80-metre strike from Micheal Leane as their defence pushed forward to try to make use of a strong wind. Kerry’s shooting was wasteful, 10 wides in the opening 35 minutes, and they had to rely on the accuracy of Nolan’s frees as the Kingdom moved out to a five-point advantage midway through the half. Down struggled for scores up front with Daithí Sands scoring late in the half to become only their second forward of the starting six to split the posts. Down relied on the clinical accuracy of their dead ball artist Paul Sheehan as his six first half frees kept the hosts within reach of Kerry with only half the match played. Three minutes after the break, Down were award a penalty, which Conor Woods smashed low to Stackpoole’s right and the comeback had begun. By the 18th minute Down were level as Jordan Doran made it 15 points each, five minutes after being introduced. By now, Down were out-working Kerry, turning them over and pressurising them at every opportunity, not allowing them to get their heads up. As the game edged towards its conclusion, the sides couldn’t be separated, as two Woods long range frees brought parity once again, after the impressive Colum Harty grabbed his second and third scores of the half for the visitors. With almost five minutes of injury time played it took two late frees from Oisin MacManus to finally see Down take the points and top Division Two, thus gaining an automatic spot to the League final in a few weeks’ time. Down: S Keith, M Hughes, J McManus, T Murray, C Taggart, C Woods 1-2, 1 pen, 2f, M Conlan 0-1, P Óg McCrickard 0-1, L Savage, M Fisher 0-2, P Sheehan 0-7f, R McCusker, E Sands, C Egan, D Sands 0-1. Subs: O MacManus 0-3, 2f, for C Egan (22), J Doran 0-1 for R McCusker (50), C Cassidy for T Murray 0-1 (55), B Trainor for P Sheehan (58) Kerry: M Stackpoole, C O’Keefe, E Leen, F MacKessy 0-1, F McCarthy, M Leane, C Walsh, D Collins, M Boyle, S Nolan 0-1, S Conway 0-7, 6f, C Harty 0- 3, P O’Connor 0-1, P Ahern, P Boyle 0- 4. Subs: E Ross for F McCarthy (28), N Mulcahy for P Aherne (41), M O’Connor 0-1for S Nolan (50), G Dooley for D Collins (60), F O’Sullivan for M Leane 0-2 (70).