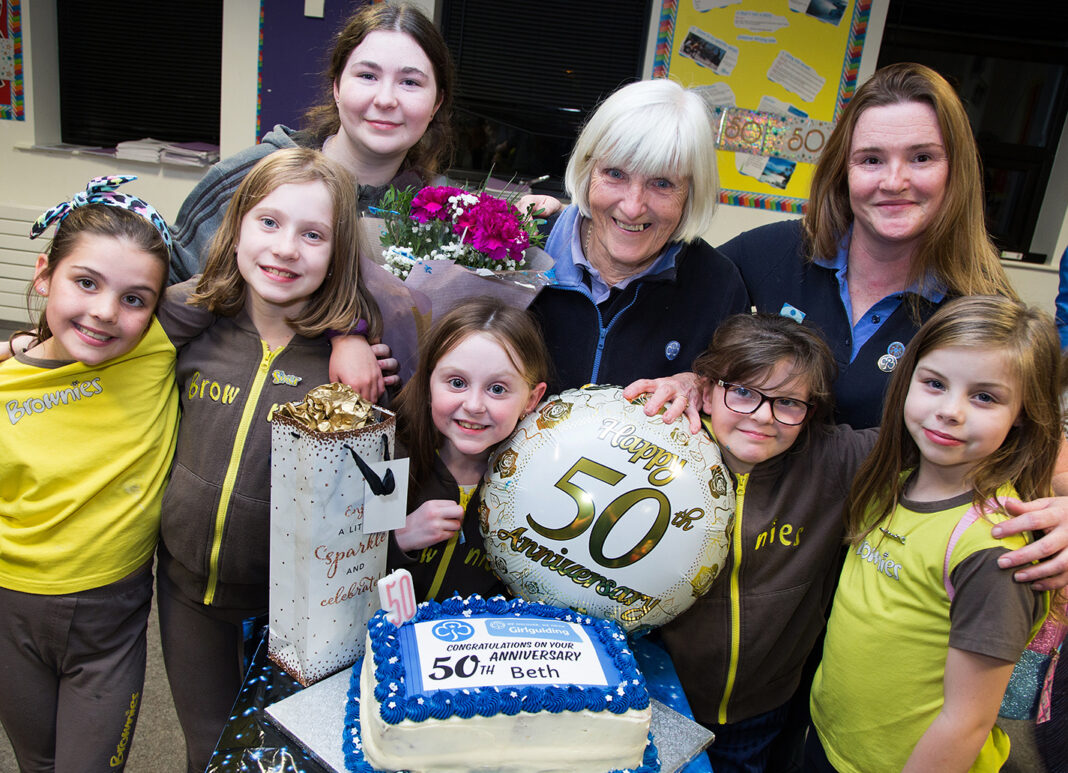 A special presentation was made last week to a local lady who has already devoted 50 years of her life to helping young people. Brownie leader Beth Cairnduff was recognised for her commitment and dedication by Girlguiding Ulster. Beth started out on this journey in Belfast, but has been with 1st Mourne Brownies, based in Newcastle, for the past eight years. She said she was humbled by this honour. And last week certainly was one for celebrations, with the local Girlguiding unit holding a surprise party for her at their weekly meet-up on Wednesday. Beth, who now lives in Kilkeel, said the surprise party “was most certainly a shock” and she has extended her thanks to everyone who attended, from the youngest Rainbow right through to the Brownies, Girl Guides and all the leaders. “I could not believe my eyes when I walked into the hall, there were all these posters, smiling faces and a beautiful cake made by one of our former leaders, Caitlin Busby, from Dundrum,” she said. “I really am so lucky, and everyone who played a part in planning the party was so thoughtful. I was absolutely speechless. It was very special and I am honoured everyone went to so much effort.” Beth also encouraged anyone interested in becoming a leader, or enrolling their daughter in the group, to come along and be a part of 1st Mourne Brownies. “It’s such a wonderful, and rewarding thing to be a part of,” she added. “To be able to see young girls flourish into outgoing, bubbly and confident young women really is something special. I have seen these girls grow in confidence and forge friendships for life, as well as even seeing second generations of families come through our doors.” Beth readily admits volunteering “is in the genes” as her mother was a Guide leader. She said her earliest memories of this youth organisation is seeing her mum stage a camp in the fields at the back of her family home. “I think I was no more than four at the time, but it’s a memory that’s stuck with me and obviously the seed was planted from there,” she continued. The local Rainbows, Brownies and Guides meet at Shimna Integrated College, and the school’s principal, Mr Steve Pagan has paid tribute to Beth’s unstinting service over the years. “Beth is a well-known and much loved figure at Shimna, running the Brownies here on Wednesday evenings over many years. Her record of service is second to none. Beth deserves all the praise and recognition she receives,” he said.