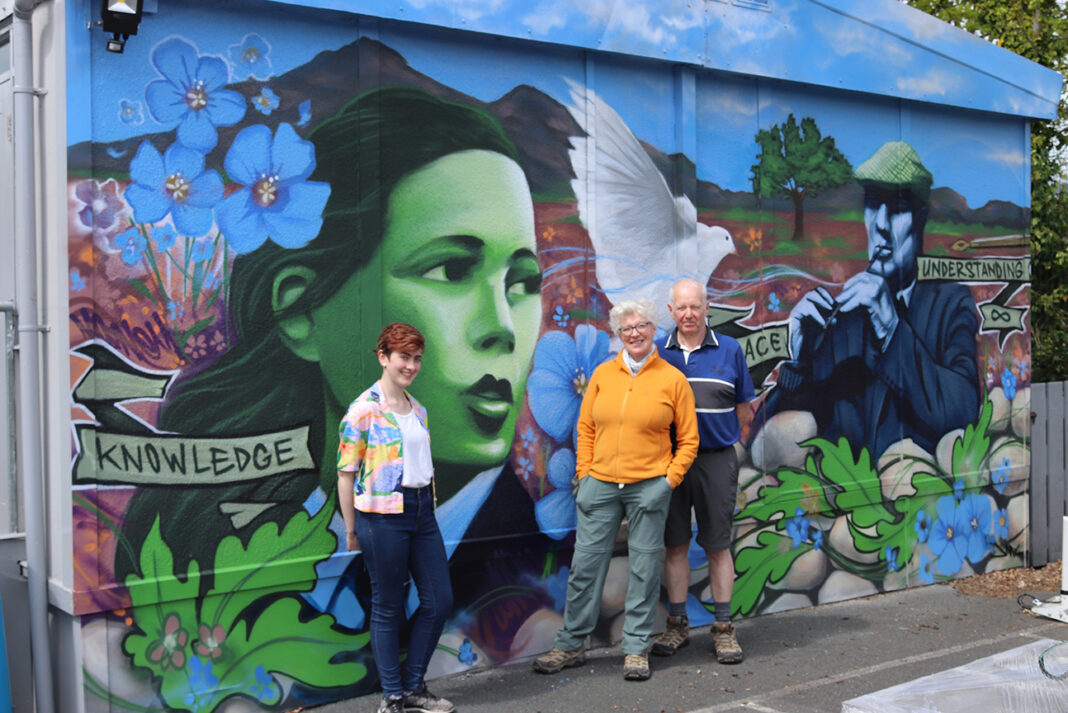 A new mural has recently been completed which celebrates the rich heritage of Moneydarragh and what a special place it is. The project was a collaboration between Moneydarragh Hub and Down Community Arts. It was led by veteran street artist Dermot McConaghy and saw members of the local community gather to discuss what was important to them from the local area and about Moneydarragh Primary School, which closed in 2018. After designing and iterating the artwork following the initial community workshops, Dermot began lining the artwork on the old Moneydarragh Primary School’s canteen wall, which is now a venue for events and workshops. Completing the work in just under a week, Dermot said he really enjoyed the project, particularly praising the “hospitality and tranquility” of the Moneydarragh area. The artwork features many themes and images close to the heart of the Moneydarragh community, including nods to Moneydarragh Primary School through the dove, ‘KnowledgeUnderstanding-Peace’ motto, and schoolgirl. The mural features a representative of the Mourne men who built the stone ditches, and oak trees and the Mourne Mountains are also portrayed. Responding to the artwork, the chairperson of Moneydarragh Hub, Margaret Rogers, said: “This beautiful mural celebrates Moneydarragh’s rich educational heritage, knowledge of ourselves and our local place, understanding of the needs of others, and the dove of peace always central to our ethos.” Leontia Haldenby from Down Community Arts set the project in motion and facilitated Dermot’s involvement. “Down Community Arts have created many sitespecific mural projects, working with many highprofile street artists, changing how public artwork can be viewed and engaged with,” Leontia said. “DCA are extremely proud of our latest collaboration with Moneydarragh Hub, working with artist Dermot McConaghy. “The hive of creativity in Moneydarragh is a real testament to the members of the Hub and surrounding community. “The finished piece which is a permanent fixture of Moneydarragh Hub contains symbolic elements reflecting the cultural richness of a strong community bond.” Moneydarragh Hub hosts local events and workshops and rents rooms for community use. Their work is available to follow on Facebook, Instagram and Twitter.