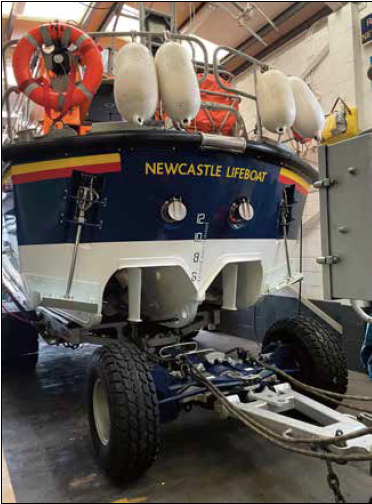 THE next chapter in Newcastle RNLI station’s already lengthy history commenced last week, with the arrival of a new Mersey-class lifeboat. The Leonard Kent replaces the Eleanor and Bryant Girling, which served the community and all those whose aid she went to for almost three decades.

The boat’s arrival is a significant moment in the local lifeboat station’s near 200-year history. This vessel is fitted with new navigation and radar systems which will be beneficial to the volunteer crew as they hone their skills before the arrival of Northern Ireland’s first Shannon-class lifeboat. Although no date has been set for this state-ofthe-art vessel’s arrival, the decision to base the Leonard Kent at Newcastle is seen as a major step forward.

According to the local lifeboat station, which was established in 1825, the volunteers are “excited” to now have the upgraded vessel. On receiving the new lifeboat to Newcastle RNLI this week, Lifeboat Operations Manager Lisa Ramsden said: “It is with a sense of nostalgia that we bid farewell to our outgoing all-weather lifeboat, the Eleanor and Bryant Girling, which served the Newcastle community and all those whose aid she went to, for almost 30 years.

“As we begin a new chapter, we are looking forward to being the custodians of the Leonard Kent and the volunteer crew are excited to now have an upgraded Mersey.” The local woman added that training on the Leonard Kent’s new and upgraded Systems and Information Management System (SIMS) was carried out while the lifeboat was on passage from Dun Laoghaire to Newcastle last week. She explained that when it retired from active service at Margate on England’s southeast coast in April last year, the Mersey class all-weather lifeboat faced an uncertain future.

The Leonard Kent initially spent some time at the RNLI Support Centre at Poole but was considered worthy of further service and subsequently earmarked to replace Newcastle’s existing Mersey class lifeboat from where it will operate until building work at the station has been completed and their new Shannon class all-weather lifeboat arrives. The boat was moved to a boatyard at West Cowes on the Isle of Wight and treated to a life-extension programme including upgrading the electronics to the latest SIMS system. Noting that the Leonard Kent is now continuing with its “lifesaving work,” Lisa explained that the removal of the original radar and navigation system from the Mersey helped to reduce weight and create more space in the wheelhouse “while an additional benefit for us here in Newcastle RNLI is that the new system will ensure the volunteer crew are prepared and proficient in the radar and navigation systems that will come with our future Shannonclass lifeboat.

” The future Shannonclass lifeboat is the latest class of all-weather lifeboats to join the RNLI fleet and is the first modern all-weather lifeboat to be propelled by water jets instead of traditional propellers, making her the fleet’s most agile and manoeuvrable all-weather lifeboat yet. These boats are capable of 25 knots, something the RNLI says make its lifesaving service more efficient and effective than ever before.