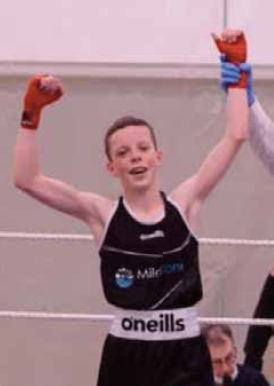 TWELVE-year-old Kilcoo lad Lorcan Grant produce three action packed rounds of
boxing to become the Antrim B3 40kg champion recently.
The extremely fit champion from Rathfriland Boxing Club maintained a blistering pace for all
three rounds, picking shots on his opponent’s target area at will.
This is nothing more than Lorcan deserves as he is one of the most hard working and dedicated trainers in the club. Well done Lorcan.

Other entrants in the Championship were MJ McNulty and Carter Devlin. MJ had a great win in his semi-final but was pipped at the post in the final while Carter bowed out at the semi-final stage against the eventual winner.
It was great experience for the lads who will be in action again in March in the Antrim 6
Championships.

Other club news
The Junior section continues on Monday and Wednesday evening with a packed house.
Everyone is coming along well and there will be an end of year Junior show in the coming
months where the young guns will show off their skills.
The Seniors have stepped up their training and sparring as they prepare for the Antrim
Open Championships. Rachel Sheppard, Yaqub Kahlifa, Bobby Shea McNulty, Liam Grant, Odhran Clancy and Aodhan Cunningham will hope to win Antrim
titles which is a qualifier for the All Ireland Championship. Good luck to everyone.

* U-18 boxer Donagh Keary was recently invited onto the Irish U-18 squad for training
every Saturday.
This is a great opportunity for Donagh to hone his already outstanding skills and hopefully cement a place on the Irish team for any upcoming Championships or international
competitions. It’s all go in the club at the minute with everyone training hard preparing for the busy season ahead.