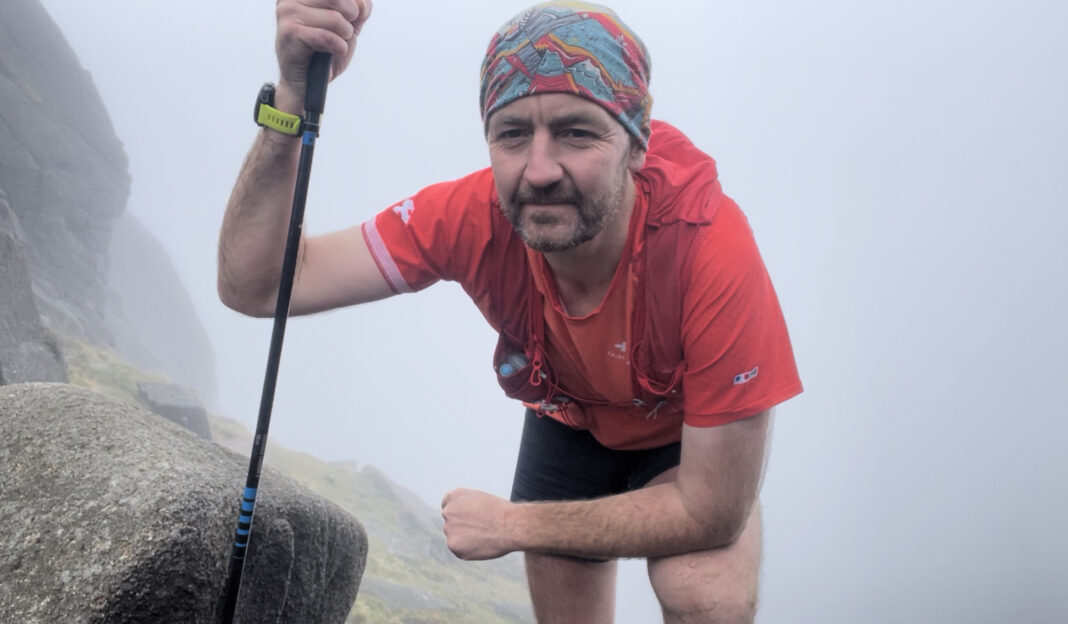 MOST people would be happy conquering the heights of Slieve Binnian once in the damp and murky month of October, but Kilkeel man Robbie Marsh has decided to do it 40 times in support of mental health awareness.

The Mourne Mountains hold a special place in Robbie’s heart, which is why he chose Slieve Binnian to undertake his mammoth Hike2Health challenge. “I was once asked did you find the mountains, or did the mountains find you?” Robbie explained. “I had spent 21 years working in a fastpaced manufacturing environment and throughout my management career the only thing that would help to reduce the stress of the job was a hike into the Mournes. “It didn’t matter what I was going through or how mentally exhausted I felt, I always returned from the summit with a bounce in my step, and a smile on my face. “There is something magical about the Mourne Mountains, I found them to be a place of healing, but also a place to be challenged and tested, a place of growth.”

After many years working for an aerospace manufacturing firm as a quality manager, Robbie decided to take a leap of faith and set up his own mountain guiding business, Mourne Mountain Adventures. “The more I ventured into the mountains the more I felt connected to them, they had helped me through my hardships and I wanted to share the gift they had to offer with others. “That’s why I decided to leave my management career behind to set up Mourne Mountain Adventures.”

Mourne Mountain Adventures has been in operation for three years now, with the company offering a number of services including private tours, hikes and camping expeditions. “Over the three years that we have been in operation I have met some amazing individuals; some come to be challenged, some come for the Instagram pic, but many come in search of a place to quiet the mind,” Robbie said. At the start of summer, Robbie received some devastating news that led him on the path towards his Slieve Binnian challenge. “One of our group members missed the last hike in a series which was on my favourite mountain, Slieve Binnian.

Not wanting him to miss out on the finale I arranged another date but on the morning of the hike I received the crippling news that he had taken his own life.” Robbie wanted to do something that would honour his memory and help highlight the issue of mental health. “Unfortunately depression is a growing problem, and since hearing the news of his passing, I wanted to do something that would help to bring awareness to people that the simple act of getting outside could help ease the symptoms. “I thought it would be a good idea to start a Hike2Health campaign and set myself a goal of climbing Slieve Binnian 40 times during the month of October, the mountain he didn’t get to climb.” Robbie started his Hike2Health challenge on the 3rd of October and has accomplished his goal of 40 ascents by the end of the month. Due to work commitments, Robbie has often found himself unable to scale Slieve Binnian until 6pm in the evening, sometimes not returning until 10pm at night.

He says he wants to get the message out there that it can be beneficial to get outside, no matter what the time of year, despite the voice in the back of our heads telling us not to, which is why he chose to do the challenge in October. Speaking last Thursday, when he had chalked up 30 hikes to the summit of Binnian, the local man said: “October was always going to be a difficult month. The dark nights close in and there’s a big difference between the start of the month and the end of the month. “It sort of relates to mental health and what people go through.

I know the last 10 summits will be a struggle for me but that struggle is still not the same as what others go through. “I have felt tired and exhausted during the campaign, I have heard the negative chatter and reasoning as to why it would be a good idea not to go out this evening, but once you start to ignore the little voice in your head and do it anyway you will see good things start to happen.” To find out more about Robbie’s campaign, you can search for Mourne Mountain Adventures on Facebook or Instagram. You can also check out his website blog at https://www.mournemountainadventures. co.uk.