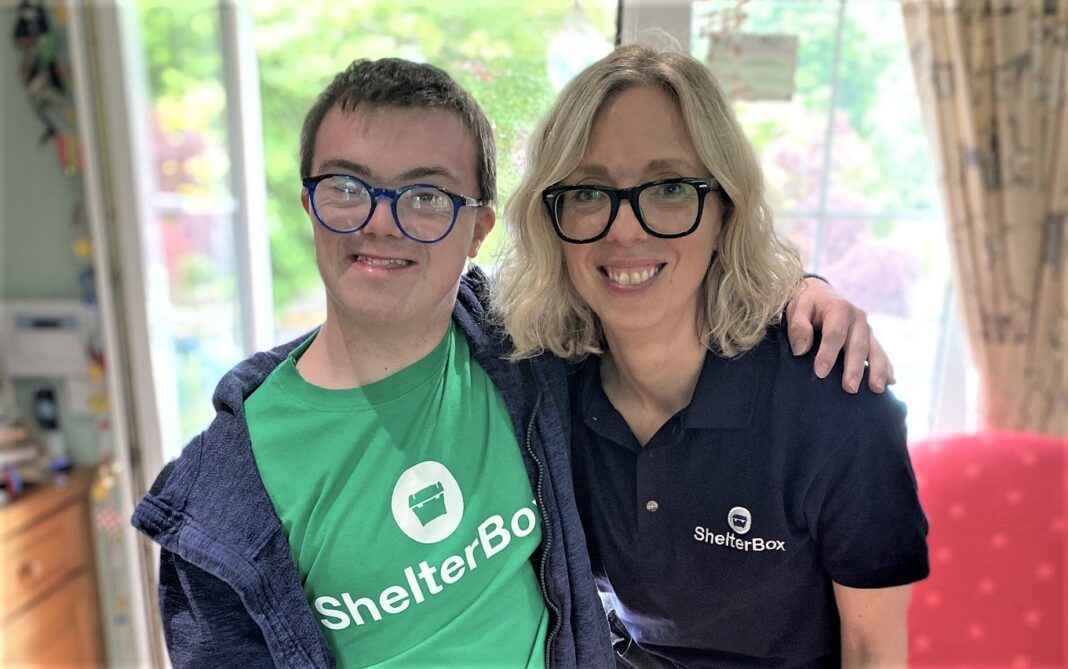 A CHARITY that is helping people affected by the devastating war in Ukraine is the latest good cause to benefit from Ryan Bogues’ fantastic fundraising.

Twenty-seven-year-old Ryan, who has Downs Syndrome, has been raising money for charity for the last seven years by baking cakes and creating homemade jams to sell to members of the public. With the help of his mum, sister, and loyal supporters, Ryan has raised more than £50,000 through Ryan’s Cookie Box.   The keen baker’s chosen ‘charity of the month’ for June was ShelterBox, which specialises in emergency shelter and helps people all over the world who have lost their homes because of conflict or disaster.

It was the charity’s work supporting internally displaced people in Ukraine, and people fleeing the war-torn country, that caught the attention of Ryan and his family, via Lisburn Rotary Club.  Hazel, Ryan’s mum, said: “We wanted to fundraise for a charity that was providing practical and easy to understand help for the families affected by this conflict – because it is important to us that Ryan is able to understand the difference that his little business makes.  “ShelterBox sings to us because it provides emergency shelter and tools for people who have been made homeless through disaster and conflict.”  Ryan has raised more than £1,500 for ShelterBox with his delicious bakes and the generosity of Ryan’s Cookie Box customers.  “Ryan has the strongest moral compass of nearly anyone I know, like his Grampa, and it comes out in deeds rather than words,” Hazel added. “He was, however, very keen that everyone in need should have a tent, a mattress, a torch, a frying pan, blankets, food, water, toilet roll…and a hot tub. “Now that might sound like he is missing the point a little, but his logic is that hot tubs are great, and everybody should have the chance to use one, no matter what their circumstances.”

Harriett Roberts is Director of Fundraising and Communications at ShelterBox. From Portrush, but now living in Greenisland, Harriett visited Ryan and his family to find out more about his love of baking and fundraising.   “It’s not often you meet people as inspirational as Ryan and his family,” Harriett said. “They are making a huge difference to charities like ShelterBox every single month and we are so grateful to have had their support.   “People come from across Northern Ireland to sample the delicious treats inside Ryan’s Cookie Box, and I can see why! I can’t wait for my next hamper of goodies.”  Ryan’s mum added: “While we were keen to hear all about Harriett’s work at ShelterBox she was just as keen to hear all about Ryan’s Cookie Box, and how it works.  “She stayed for the afternoon, and we talked and talked – and even managed to fit in enough time to make a batch of chocolate brownies.”  As well as supporting people affected by the war in Ukraine, ShelterBox is currently working in the Philippines, Yemen, Syria, Cameroon, Burkina Faso, Nigeria, Ethiopia and Haiti.

The charity is also sending an assessment team to Bangladesh following some of the worst flash flooding to ever hit South Asia.  ShelterBox relies heavily on public donations to fund its responses across the world. Since the charity was founded in 2000, ShelterBox has helped more than two million people across 98 countries.   For more information about ShelterBox visit shelterbox.org