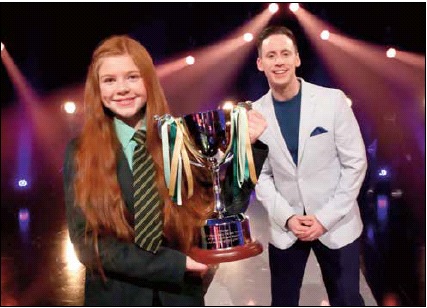 A talented 12-year-old Mayobridge girl was revealed as the winner of the Junior School final of this year’s BBC Northern Ireland School Soloist of the Year at the weekend. After weeks of competing through heats broadcast on BBC Radio Ulster and BBC Sounds, Sophie Lennon made it through to the final in the BBC’s Blackstaff Studios in Belfast. The three judges – Sheelagh Greer, Alan Leech and Sarah Richmond – were very impressed with the Sacred Heart Grammar School pupil’s performances of Don’t Rain on My Parade and For Good, awarding her the title and a trophy. Speaking after the final was aired on BBC One Northern Ireland on Sunday evening, Sophie’s mum Theresa spoke of the family’s delight at what is the latest in a series of successes for their daughter. She also revealed that, just next week, Sophie will be playing the role of a young Fiona in Shrek when it takes to the stage of the Grand Opera House and that she has also been cast as the lead role in Marnie and the Kaleidoscope, which is set to open in London’s West End this summer. Speaking of the experience gained and the memories made during the BBC competition, Theresa said Sophie “thoroughly enjoyed each part of the process”. Noting her daughter’s natural abilities as well as her desire to broaden her talents, Theresa said Sophie “is absolutely thrilled with this latest achievement” and “took away some fantastic memories as part of the competition’s experience.” Putting on record Sophie and the wider family’s appreciation not only for the words of encouragement throughout the competition, but the messages of congratulations which have come flooding through since the final was broadcast, Theresa said “we are so appreciative of everyone’s kindness, support and encouragement – it was second to none, but sure it always is.” She said due to the level of talent amongst the finalists Sophie “never thought she would get to the end of the competition.” “We have been blown away by the messages we have received, it’s lovely to read these wonderful words,” Theresa added. She said that despite Sophie’s successes of late, including reaching the finals of the Junior Eurovision Ireland competition, as well as performing on the renowned Late Late Toy Show in the lead-up to Christmas, she “has her feet on the ground”. “I think that’s the secret to this all, Sophie has this amazing quality where she never takes things for granted and really appreciates and values every bit of support and assistance she has received, as well as the various doors that have been opened to her,” said Theresa, before putting on record appreciation to Sophie’s singing teacher Fiona Flynn and schoolteacher Linda Turley for their encouragement and support throughout.