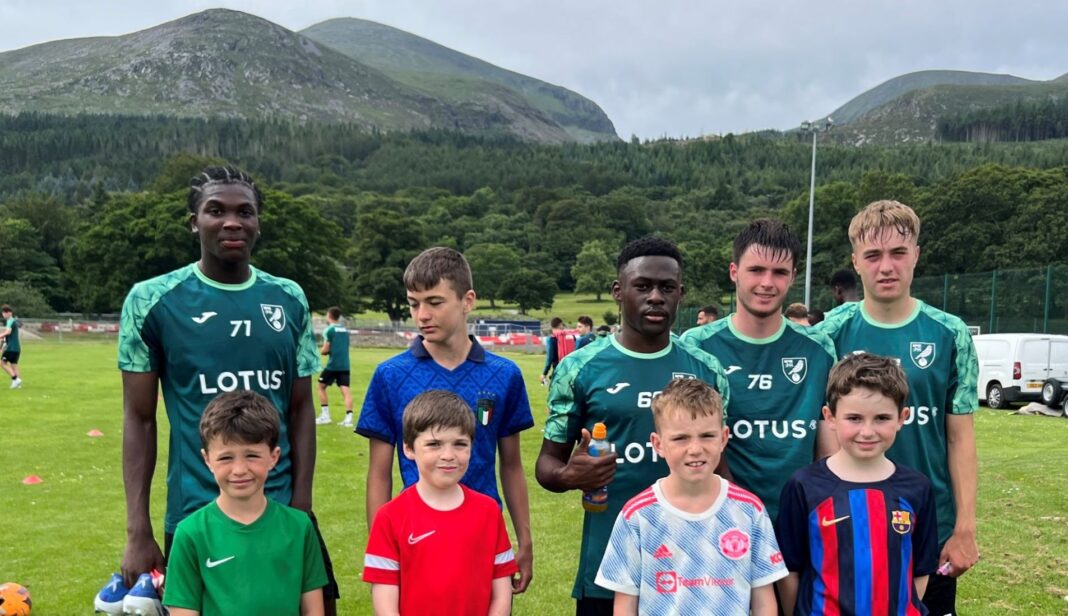 WHAT an action-packed five days at the first of the Tollymore United Soccer Fun Weeks. Over 60 boys and girls enjoyed themselves at a sun-drenched Donard Park, Newcastle, learning new skills and making new friends.

Added to the excitement was the visit of English Championship side Norwich City’s U-18 Academy side who were in Newcastle for a six-day pre-season training camp. “It’s been a terrific week, not only for the boys and girls but also for the coaches,” said Fun Week coordinator Paul Moore “The boys and girls have been brilliant. They have been very keen to learn from the coaches and by the end of the week you could see how much everyone has improved, which makes our job very rewarding”

As ever, the Mini World Cups and penalty shoot-outs continue to be everyone’s favourite. Another pleasing aspect was the increase in the number of girls taking part. Coach Johnny Harbinson remarked: “It has been really good to see that more and more young girls are taking part in football, and I think part of this is down to the media coverage of the Northern Ireland ladies team reaching the Euro finals. “We always get quite a few girls on the Fun Weeks, but it is noticeable this year that there has been a marked increase, which is very encouraging.”

The second Soccer Fun Week has just started and the next one runs from August 1-5. Cost is £40pp for the week and everyone gets a medal and a golden ticket for the Mourne Eye. There are discounts for additional family members and application forms can be obtained from the Newcastle Centre, Tesco’s, Crystal Clean Dry Cleaners, McCready’s Shoe Shop and other outlets.

Norwich Academy training camp Alongside the Soccer Fun Week Norwich City’s U-18 Academy side enjoyed a pre-season training camp. Based at Greenhill YMCA, the team had a packed itinerary including training twice a day on the Tollymore United pitch, either side of a gym session, and a match on Friday morning against the County Antrim Super Cup NI team before flying home. Included in the week were team building activities and some down time which saw the group going on the Mourne Eye in Castle Park.

Norwich Academy coach Greg Crane emphasised the benefits of the trip for his players and backroom staff. “We have had a brilliant trip. Our accommodation and catering at Greenhill YMCA were first class with the chef working closely with our nutritionist and dietician to ensure that everything was to our requirements. “The boys really enjoyed the team building activities, and in particular the raft building. “From my perspective the playing facilities were perfect and the game with County Antrim gave the boys a really good workout.” Norwich are the latest in a number of cross-water teams, including AFC Wrexham, Wolverhampton Wanderers U-23 side and Gillingham FC, to use Newcastle for a pre-season base and the success of this trip suggests that there may be others in the future.