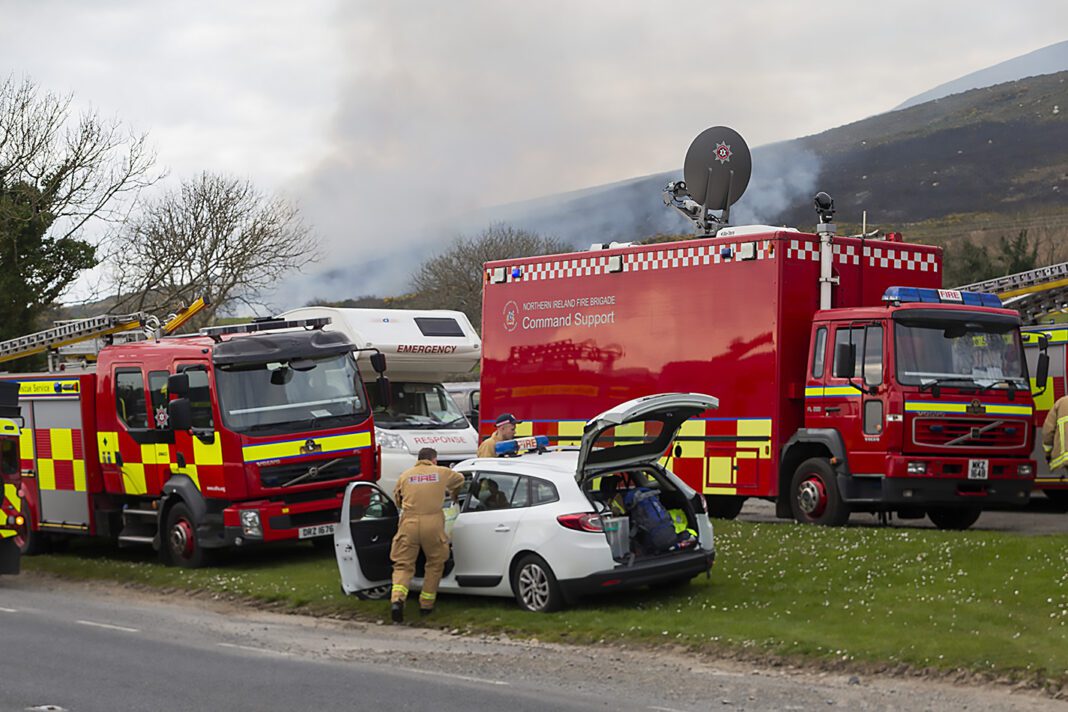 FIREFIGHTERS have been busy battling a series of wildfires on the Mourne Mountains during the past week. At one point on Sunday there were 20 acres of gorse on fire near Spelga Dam, with the fire front stretching a mile long. On Monday morning, the fire service had 24 fire fighters at the scene and four pumps were being used to control the fire that had reduced to 10 acres. They said that the fire had been started deliberately on Sunday. Last Wednesday eight fire appliances attended a gorse fire on Cock Mountain and Hen Mountain. There were also reports of a fire in the Slieve Martin area on the same day. The Northern Ireland Fire and Rescue Service (NIFRS) reported last Wednesday that their firefighters were ‘working hard to extinguish the fire using beaters and knapsack sprayers’. They warned the public to avoid the area. Later on last Wednesday the NIFRS provided this further update: ‘Throughout today (Wednesday) firefighters have responded to a number of wildfires, including two significant ones in the Mourne Mountains. At the height of both of these incidents six appliances and over 30 personnel were in attendance at each incident. “Our firefighters have not only worked really hard when responding to these incidents but have also continued to provide cover and respond to incidents across the wider Mournes area. “These incidents do put an additional strain on our resources and therefore we are asking for the public to support us by not starting fires in the countryside.” The problems continued on Thursday when the fire and rescue service was called to Bloody Bridge to attend to another outbreak. The NIFRS has reported that from Monday to Thursday last week they responded to 67 different wildfire calls across Northern Ireland. The wildfires led to a joint call from the Department of Agriculture, Environment and Rural Affairs, the PSNI and the Northern Ireland Fire and Rescue Service for the public’s assistance in preventing the wildfires. They asked for visitors and the residents of rural areas to be vigilant. The message was supported by the DAERA Minister Edwin Poots, who said: “Everyone needs to act responsibly and remain vigilant to wildfire. “Wildfires are a risk to life and property, while causing extensive environmental damage and diverting the emergency services’ resources away from where they are most needed, protecting and serving the community.” Group Commander Mark Smyth, NIFRS, said: “Dealing with wildfires unnecessarily draws our resources away from where they are needed most – protecting our community. They also cause significant damage to wildlife and the environment.” Chief Superintendent Wendy Middleton said: “Gorse fires have the potential to cause widespread damage to the environment and harm to wildlife, as well as threatening homes, farms and the people living in those areas. “The unpredictability of fire can also mean that those causing them may be putting their own lives at risk as well as the lives of the fire service personnel and other emergency services tasked to deal with them.” The Department of Agriculture, Environment and Rural Affairs, the PSNI and the Northern Ireland Fire and Rescue Service also advised farmers and land managers to take all necessary precautions to ensure that any prescribed burning within the remaining burn period (until the 14th of April) does not turn into a wildfire incident. Their statement added: “When considering prescribed burning it must be done in a controlled manner and under careful supervision. “Prior to any prescribed burn you are advised to contact NIFRS headquarters (02892664221) to alert them and discuss the details. You should notify NIFRS when you have completed your burning operations. “The public are also urged to exercise common sense in the countryside. Never leave BBQs and camp fires unattended and when finished extinguish camp fires fully and take portable/disposable BBQs home after use and be considerate in parking vehicles so as not to block access for emergency vehicles. “The public are also reminded that deliberate setting of wildfires is a criminal offence and if you see anyone setting a fire you should call the PSNI immediately. “Wildfires are not natural, they are almost always started by humans, either deliberately or through carelessness. They put lives at risk, destroy our surroundings and the wildlife in them, and are a real cost to society.