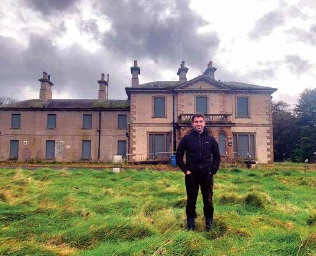 Local mental health charity MYMY has been forced to abandon its plans to turn Ardnabannon House, outside Castlewellan, into a world-class mental health and wellbeing hub. The goal of turning the historic mansion house and its grounds, which up until recently was used by the Education Authority as an outdoor education centre, emerged less than two years ago. It had been earmarked by the Newcastle charity as the ideal site for offering a range of services, including therapeutic interventions and counselling. However, rapidly rising costs have seen the initial predicted cost of £1.5m more than double. The decision to not pursue the purchase, and the overall decision to walk away from the ambitious project at Ardnabannon, has not been taken lightly by MYMY and its management committee. The charity’s aspiration to transform both the property and grounds first emerged in August 2020, when MYMY’s co-founder Ray Cunningham confirmed their desire to purchase the 16-acre site and utilise the premises and grounds to create a “person-centred” wellbeing facility, offering support to young people and their families. At the time, it was made clear the purchase would need to be completed by the end of March 2022, but, as confirmed by the charity this week, projected costs, received at the end of January, showed that the estimated cost of the project had risen to £3.25m. The amount of time the property has been vacant – approximately five years – has not helped its fabric. Ardnabannon House was built in 1868 by Charles Murland, owner of the Annsborough linen mills. The mills were sold to Ulster Weavers Company in 1937 but the house stayed in the Murland family until 1943 when it was sold to the chairman of Ulster Weavers, Sir Graham Larmour, who made it his main residence. In 1967 the property was sold to the Down County Education Committee and then converted into an outdoor pursuits centre. It was further expanded in 1994 under the South Eastern Education and Library Board and refurbished by them in 2005, before being closed by the Education Authority in 2017. It has lain empty since then. Speaking with his local paper on Monday, Ray admitted walking away from the project has been a difficult decision. “My heart is broken,” he added. The management committee has also acknowledged the strength of public support for the initiative, but said this had to be balanced with protecting MYMY and the work it continues to do. “Over eighteen months ago MYMY started an exciting journey to purchase Ardnabannon House, the former outdoor recreation centre. “Our vision was to bring back the historic integrity of this B1 listed building and develop it into a mental health and wellbeing hub. “During this time MYMY has been carrying out design development, carrying out surveys and costs to restore the building, as well as timber and condition surveys,” Ray said. “It was estimated that the costs would be in the region of £1.5m, however the costs received at the end of January showed that the estimated costs had risen to £3.25m. “The amount of time the property has been vacant has not helped its fabric and no-one was expecting the extent that Brexit and Covid would impact on costs.” Adding that MYMY’s Management Committee “carefully reviewed all the information they had,” Ray said the committee “reluctantly decided that they could not proceed with purchasing Ardnabannon.” He added: “My heart is broken. It is such a fantastic site for therapeutic interventions and counselling, and a valuable community asset.” The charity’s chairman, John Toner, echoed Ray’s disappointment. “This was a very tough decision,” he admitted. “We can all see the potential benefits for the community but it is our responsibility to ensure we protect the charity, and the core work we do. “This cost – together with rising energy costs and current economic uncertainties – is too high for us to proceed with confidence. “We thank the local politicians and community for all their support, and we hope everyone understands we need to be realistic. Hopefully a new champion will step forward with deeper pockets,” he concluded.